Vibrio harveyi: a serious pathogen of fish and invertebrates in mariculture 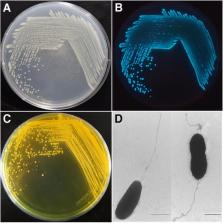 Vibrio harveyi, which belongs to family Vibrionaceae of class Gammaproteobacteria, includes the species V. carchariae and V. trachuri as its junior synonyms. The organism is a well-recognized and serious bacterial pathogen of marine fish and invertebrates, including penaeid shrimp, in aquaculture. Diseased fish may exhibit a range of lesions, including eye lesions/blindness, gastro-enteritis, muscle necrosis, skin ulcers, and tail rot disease. In shrimp, V. harveyi is regarded as the etiological agent of luminous vibriosis in which affected animals glow in the dark. There is a second condition of shrimp known as Bolitas negricans where the digestive tract is filled with spheres of sloughed-off tissue. It is recognized that the pathogenicity mechanisms of V. harveyi may be different in fish and penaeid shrimp. In shrimp, the pathogenicity mechanisms involved the endotoxin lipopolysaccharide, and extracellular proteases, and interaction with bacteriophages. In fish, the pathogenicity mechanisms involved extracellular hemolysin (encoded by duplicate hemolysin genes), which was identified as a phospholipase B and could inactivate fish cells by apoptosis, via the caspase activation pathway. V. harveyi may enter the so-called viable but nonculturable (VBNC) state, and resuscitation of the VBNC cells may be an important reason for vibriosis outbreaks in aquaculture. Disease control measures center on dietary supplements (including probiotics), nonspecific immunostimulants, and vaccines and to a lesser extent antibiotics and other antimicrobial compounds.

Survival and viability of nonculturableEscherichia coli andVibrio cholerae in the estuarine and marine environment.

Lara N Roberts,  Shun Xu,  R Attwell … (1982)
Plating methods for estimating survival of indicator organisms, such asEscherichia coli, and water-borne pathogens includingVibrio cholerae, have severe limitations when used to estimate viable populations of these organisms in the aquatic environment. By combining the methods of immunofluorescent microscopy, acridine orange direct counting, and direct viable counting, with culture methods such as indirect enumeration by most probable number (MPN) estimation and direct plating, it was shown that bothE. coli andV. cholerae undergo a "nonrecoverable" stage of existence, but remain viable. Following 2-week incubations in saltwater (5-25%o NaCl) microcosms, total counts, measured by direct microscopic examination of fluorescent antibody and acridine orange stained cells, remained unchanged, whereas MPN estimates and plate counts exhibited rapid decline. Results of direct viable counting, a procedure permitting estimate of substrate-responsive viable cells by microscopic examination, revealed that a significant proportion of the nonculturable cells were, indeed, viable. Thus, survival of pathogens in the aquatic environment must be re-assessed. The "die-off" or "decay" concept may not be completely valid. Furthermore, the usefulness of the coliform and fecal coliform indices for evaluating water quality for public health purposes may be seriously compromised, in the light of the finding reported here.

Bonnie Bassler,  M. Henke (2004)
In a process known as quorum sensing, bacteria communicate with one another by producing, releasing, detecting, and responding to signal molecules called autoinducers. Vibrio harveyi, a marine pathogen, uses two parallel quorum-sensing circuits, each consisting of an autoinducer-sensor pair, to control the expression of genes required for bioluminescence and a number of other target genes. Genetic screens designed to discover autoinducer-regulated targets in V. harveyi have revealed genes encoding components of a putative type III secretion (TTS) system. Using transcriptional reporter fusions and TTS protein localization studies, we show that the TTS system is indeed functional in V. harveyi and that expression of the genes encoding the secretion machinery requires an intact quorum-sensing signal transduction cascade. The newly completed genome of the closely related marine bacterium Vibrio parahaemolyticus, which is a human pathogen, shows that it possesses the genes encoding both of the V. harveyi-like quorum-sensing signaling circuits and that it also has a TTS system similar to that of V. harveyi. We show that quorum sensing regulates TTS in V. parahaemolyticus. Previous reports connecting quorum sensing to TTS in enterohemorrhagic and enteropathogenic Escherichia coli show that quorum sensing activates TTS at high cell density. Surprisingly, we find that at high cell density (in the presence of autoinducers), quorum sensing represses TTS in V. harveyi and V. parahaemolyticus.