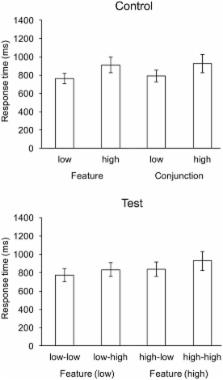 Theories of cognition that posit complementary dual-route processes afford better fits to the data when each route explains a part of the data not explained by the other route. However, such theories must also explain why each route is invoked, lest one can fit any data set with enough alternatives. One possible explanation is that route selection is based on a least-cost principle: the route that requires fewer cognitive resources (including time) relative to the goal at hand. We investigated this explanation with a dual-display version of visual search, where the target could be identified via opposing (easy or hard forms of) feature and conjunction search conditions. The data support a contextualized version of the least-cost principle in that the cost of computing least-cost also influences route selection: participants assessed alternatives, but only when the cost of that assessment was relatively low.

A feature-integration theory of attention

A new method for off-line removal of ocular artifact.

Jeffrey Coles,  G Gratton,  E Donchin (1983)
A new off-line procedure for dealing with ocular artifacts in ERP recording is described. The procedure (EMCP) uses EOG and EEG records for individual trials in an experimental session to estimate a propagation factor which describes the relationship between the EOG and EEG traces. The propagation factor is computed after stimulus-linked variability in both traces has been removed. Different propagation factors are computed for blinks and eye movements. Tests are presented which demonstrate the validity and reliability of the procedure. ERPs derived from trials corrected by EMCP are more similar to a 'true' ERP than are ERPs derived from either uncorrected or randomly corrected trials. The procedure also reduces the difference between ERPs which are based on trials with different degrees of EOG variance. Furthermore, variability at each time point, across trials, is reduced following correction. The propagation factor decreases from frontal to parietal electrodes, and is larger for saccades than blinks. It is more consistent within experimental sessions than between sessions. The major advantage of the procedure is that it permits retention of all trials in an ERP experiment, irrespective of ocular artifact. Thus, studies of populations characterized by a high degree of artifact, and those requiring eye movements as part of the experimental task, are made possible. Furthermore, there is no need to require subjects to restrict eye movement activity. In comparison to procedures suggested by others, EMCP also has the advantage that separate correction factors are computed for blinks and movements and that these factors are based on data from the experimental session itself rather than from a separate calibration session.

Top-down versus bottom-up control of attention in the prefrontal and posterior parietal cortices.

Earl Miller,  Timothy Buschman (2007)
Attention can be focused volitionally by "top-down" signals derived from task demands and automatically by "bottom-up" signals from salient stimuli. The frontal and parietal cortices are involved, but their neural activity has not been directly compared. Therefore, we recorded from them simultaneously in monkeys. Prefrontal neurons reflected the target location first during top-down attention, whereas parietal neurons signaled it earlier during bottom-up attention. Synchrony between frontal and parietal areas was stronger in lower frequencies during top-down attention and in higher frequencies during bottom-up attention. This result indicates that top-down and bottom-up signals arise from the frontal and sensory cortex, respectively, and different modes of attention may emphasize synchrony at different frequencies.