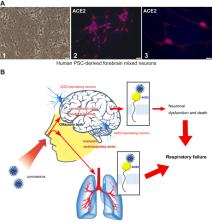 The recent outbreak of 2019 coronavirus disease (COVID-19), caused by a novel coronavirus, has now spread quickly worldwide. Like the severe acute respiratory syndrome coronavirus (SARS-CoV), this novel type of coronavirus, SARS-CoV-2, has been demonstrated to utilize angiotensin-converting enzyme 2 (ACE2) as an entry point to the cells. There is a growing body of reports indicating that COVID-19 patients, especially those in severe condition, exhibit neurological symptoms, thus supporting the possibility that SARS-CoV-2 could infect and damage neurons within the central nervous system in humans. Using human pluripotent stem cells-derived neurons, here we show the expression of ACE2 in human neurons via immunocytochemistry. From this perspective, we elaborate on the idea that the neuro-invasive potential of SARS-CoV-2 should be considered as a possible contributory factor, as well as a therapeutic target, for the severe respiratory symptoms in critical COVID-19 cases.

Roujian Lu,  Xiang Zhao,  Juan Li … (2020)
Summary Background In late December, 2019, patients presenting with viral pneumonia due to an unidentified microbial agent were reported in Wuhan, China. A novel coronavirus was subsequently identified as the causative pathogen, provisionally named 2019 novel coronavirus (2019-nCoV). As of Jan 26, 2020, more than 2000 cases of 2019-nCoV infection have been confirmed, most of which involved people living in or visiting Wuhan, and human-to-human transmission has been confirmed. Methods We did next-generation sequencing of samples from bronchoalveolar lavage fluid and cultured isolates from nine inpatients, eight of whom had visited the Huanan seafood market in Wuhan. Complete and partial 2019-nCoV genome sequences were obtained from these individuals. Viral contigs were connected using Sanger sequencing to obtain the full-length genomes, with the terminal regions determined by rapid amplification of cDNA ends. Phylogenetic analysis of these 2019-nCoV genomes and those of other coronaviruses was used to determine the evolutionary history of the virus and help infer its likely origin. Homology modelling was done to explore the likely receptor-binding properties of the virus. Findings The ten genome sequences of 2019-nCoV obtained from the nine patients were extremely similar, exhibiting more than 99·98% sequence identity. Notably, 2019-nCoV was closely related (with 88% identity) to two bat-derived severe acute respiratory syndrome (SARS)-like coronaviruses, bat-SL-CoVZC45 and bat-SL-CoVZXC21, collected in 2018 in Zhoushan, eastern China, but were more distant from SARS-CoV (about 79%) and MERS-CoV (about 50%). Phylogenetic analysis revealed that 2019-nCoV fell within the subgenus Sarbecovirus of the genus Betacoronavirus, with a relatively long branch length to its closest relatives bat-SL-CoVZC45 and bat-SL-CoVZXC21, and was genetically distinct from SARS-CoV. Notably, homology modelling revealed that 2019-nCoV had a similar receptor-binding domain structure to that of SARS-CoV, despite amino acid variation at some key residues. Interpretation 2019-nCoV is sufficiently divergent from SARS-CoV to be considered a new human-infecting betacoronavirus. Although our phylogenetic analysis suggests that bats might be the original host of this virus, an animal sold at the seafood market in Wuhan might represent an intermediate host facilitating the emergence of the virus in humans. Importantly, structural analysis suggests that 2019-nCoV might be able to bind to the angiotensin-converting enzyme 2 receptor in humans. The future evolution, adaptation, and spread of this virus warrant urgent investigation. Funding National Key Research and Development Program of China, National Major Project for Control and Prevention of Infectious Disease in China, Chinese Academy of Sciences, Shandong First Medical University.

I Hamming,  W Timens,  MLC Bulthuis … (2004)
Abstract Severe acute respiratory syndrome (SARS) is an acute infectious disease that spreads mainly via the respiratory route. A distinct coronavirus (SARS‐CoV) has been identified as the aetiological agent of SARS. Recently, a metallopeptidase named angiotensin‐converting enzyme 2 (ACE2) has been identified as the functional receptor for SARS‐CoV. Although ACE2 mRNA is known to be present in virtually all organs, its protein expression is largely unknown. Since identifying the possible route of infection has major implications for understanding the pathogenesis and future treatment strategies for SARS, the present study investigated the localization of ACE2 protein in various human organs (oral and nasal mucosa, nasopharynx, lung, stomach, small intestine, colon, skin, lymph nodes, thymus, bone marrow, spleen, liver, kidney, and brain). The most remarkable finding was the surface expression of ACE2 protein on lung alveolar epithelial cells and enterocytes of the small intestine. Furthermore, ACE2 was present in arterial and venous endothelial cells and arterial smooth muscle cells in all organs studied. In conclusion, ACE2 is abundantly present in humans in the epithelia of the lung and small intestine, which might provide possible routes of entry for the SARS‐CoV. This epithelial expression, together with the presence of ACE2 in vascular endothelium, also provides a first step in understanding the pathogenesis of the main SARS disease manifestations. Copyright © 2004 Pathological Society of Great Britain and Ireland. Published by John Wiley & Sons, Ltd.

Daniel Wrapp,  Nianshuang Wang,  Kizzmekia S. Corbett … (2020)
Structure of the nCoV trimeric spike The World Health Organization has declared the outbreak of a novel coronavirus (2019-nCoV) to be a public health emergency of international concern. The virus binds to host cells through its trimeric spike glycoprotein, making this protein a key target for potential therapies and diagnostics. Wrapp et al. determined a 3.5-angstrom-resolution structure of the 2019-nCoV trimeric spike protein by cryo–electron microscopy. Using biophysical assays, the authors show that this protein binds at least 10 times more tightly than the corresponding spike protein of severe acute respiratory syndrome (SARS)–CoV to their common host cell receptor. They also tested three antibodies known to bind to the SARS-CoV spike protein but did not detect binding to the 2019-nCoV spike protein. These studies provide valuable information to guide the development of medical counter-measures for 2019-nCoV. Science, this issue p. 1260