Differences in resistance mutations among HIV-1 non-subtype B infections: a systematic review of evidence (1996–2008) 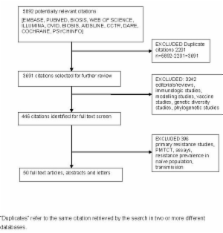 Ninety percent of HIV-1-infected people worldwide harbour non-subtype B variants of HIV-1. Yet knowledge of resistance mutations in non-B HIV-1 and their clinical relevance is limited. Although a few reviews, editorials and perspectives have been published alluding to this lack of data among non-B subtypes, no systematic review has been performed to date.

With this in mind, we conducted a systematic review (1996–2008) of all published studies performed on the basis of non-subtype B HIV-1 infections treated with antiretroviral drugs that reported genotype resistance tests. Using an established search string, 50 studies were deemed relevant for this review.

These studies reported genotyping data from non-B HIV-1 infections that had been treated with either reverse transcriptase inhibitors or protease inhibitors. While most major resistance mutations in subtype B were also found in non-B subtypes, a few novel mutations in non-B subtypes were recognized. The main differences are reflected in the discoveries that: (i) the non-nucleoside reverse transcriptase inhibitor resistance mutation, V106M, has been seen in subtype C and CRF01_AE, but not in subtype B, (ii) the protease inhibitor mutations L89I/V have been reported in C, F and G subtypes, but not in B, (iii) a nelfinavir selected non-D30N containing pathway predominated in CRF01_AE and CRF02_AG, while the emergence of D30N is favoured in subtypes B and D, (iv) studies on thymidine analog-treated subtype C infections from South Africa, Botswana and Malawi have reported a higher frequency of the K65R resistance mutation than that typically seen with subtype B.

Polymorphisms that were common in non-B subtypes and that may contribute to resistance tended to persist or become more frequent after drug exposure. Some, but not all, are recognized as minor resistance mutations in B subtypes. These observed differences in resistance pathways may impact cross-resistance and the selection of second-line regimens with protease inhibitors. Attention to newer drug combinations, as well as baseline genotyping of non-B isolates, in well-designed longitudinal studies with long duration of follow up are needed.

Global and regional distribution of HIV-1 genetic subtypes and recombinants in 2004.

Saladin Osmanov,  Joris Hemelaar,  Eleanor Gouws … (2006)
To estimate the global and regional distribution of HIV-1 subtypes and recombinants in 2004. A study was conducted in which molecular epidemiological data on HIV-1 subtype distribution in individual countries were combined with country-specific estimates of the number of people living with HIV. HIV-1 subtype data were collected for 23 874 HIV-1 samples from 70 countries, which together accounted for 89% of all people living with HIV worldwide in 2004. The proportions of HIV-1 infections due to various subtypes detected in each country were combined with the number of HIV infected people in the respective countries to generate regional and global HIV-1 subtype distribution estimates. Subtype C accounted for 50% of all infections worldwide in 2004. Subtypes A, B, D and G accounted for 12%, 10%, 3% and 6%, respectively. The subtypes F, H, J and K together accounted for 0.94% of infections. The circulating recombinant forms CRF01_AE and CRF02_AG each were responsible for 5% of cases, and CRF03_AB for 0.1%. Other recombinants accounted for the remaining 8% of infections. All recombinant forms taken together were responsible for 18% of infections worldwide. Combining data on HIV-1 subtype distribution in individual countries with country-specific estimates of the number of people living with HIV provided a good method to generate estimates of the global and regional HIV-1 genetic diversity in 2004. The results could serve as an important resource for HIV scientists, public health officials and HIV vaccine developers.

Jean Nachega,  Christine Chaisson,  Gary Maartens … (2007)
Adherence of 95% or more to unboosted protease regimens is required for optimal virologic suppression in HIV-1-infected patients. Whether the same is true for nonnucleoside reverse transcriptase inhibitor (NNRTI)-based therapy is unclear. To assess the relationship between adherence to NNRTI-based therapy and viral load in treatment-naive patients. Observational cohort study. Private-sector HIV and AIDS disease management program in South Africa. 2821 adults infected with HIV who began NNRTI-based therapy between January 1998 and March 2003 (2764 patients [98%] were enrolled after December 2000). Adherence was assessed by monthly pharmacy claims. The primary end point was sustained viral load suppression ( 400 copies/mL). The median follow-up period was 2.2 years (interquartile range, 1.7 to 2.7 years). The proportion of patients with sustained viral load suppression ranged from 13% (41 of 325 patients) in patients who filled less than 50% of antiretroviral drug prescriptions to 73% (725 of 997 patients) in those who filled 100% of antiretroviral drug prescriptions. Each 10% increase in pharmacy claim adherence greater than 50% was associated with a mean absolute increase of 0.10 in the proportion of patients with sustained virologic suppression (P 0.20 x 10(9) cells/L), baseline viral load greater than 10(5) copies/mL (hazard ratio, 1.39 [CI, 1.14 to 1.70]), nevirapine-based regimen (hazard ratio, 1.43 [CI, 1.16 to 1.75]), and low pharmacy claim adherence (hazard ratio, 1.58 [CI, 1.48 to 1.69], per 10% decrease in adherence to 50%). Observational study with adherence stratification at study end and lack of standardized timing for outcome measurement. Virologic outcomes improve in a linear dose-response manner as adherence to NNRTI-based regimens increases beyond 50%.

Douglas Ross,  Daniel Kuritzkes,  Henry Sunpath … (2008)
Emergence of human immunodeficiency virus type 1 (HIV-1) drug resistance may limit the benefits of antiretroviral therapy in resource-limited settings. The prevalence of resistance was assessed among patients from KwaZulu Natal, South Africa, following failure of their first highly active antiretroviral therapy (HAART) regimen. Genotypic resistance testing was performed on plasma virus samples from patients who experienced virologic failure of their first HAART regimen at 2 clinics in KwaZulu Natal. Clinical and demographic data were obtained from medical records. Regression analysis was performed to determine factors associated with > or =1 significant drug resistance mutation. From January 2005 through August 2006, a total of 124 antiretroviral-treated adults who experienced virologic failure were enrolled. The predominant subtype was HIV-1C. Virus samples from 83.5% of participants carried > or =1 significant drug resistance mutation. Dual-class drug-resistant virus was present in 64.3% of participants, and 2.6% had virus with triple-class drug resistance. The most common mutation was M184V/I (64.3% of patients); K103N was present in virus from 51.3%, and V106M was present in virus from 19.1%. Thymidine analog resistance mutations were found in virus from 32.2% of patients, and protease resistance mutations were found in virus from 4.4%. Antiretroviral drug-resistant virus was detected in >80% of South African patients who experienced failure of a first HAART regimen. Patterns of drug resistance reflected drugs used in first-line regimens and viral subtype. Continued surveillance of resistance patterns is warranted to guide selection of second-line regimens.