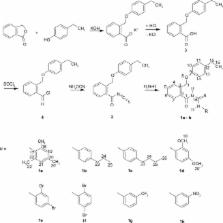 A number of 2-((4-ethylphenoxy)methyl)- N-(substituted-phenylcarbamothioyl) benzamides (1a–h) were synthesized via reaction of 2-((4-ethylphenoxy)methyl)benzoyl isothiocyanate (2) as a key intermediate with several substituted primary aromatic amines. The new compounds were characterized by proton nuclear magnetic resonance ( 1H-NMR), carbon-13 nuclear magnetic resonance ( 13C-NMR), infrared spectrometry (IR), mass spectrometry (MS), and elemental analysis. The anti-inflammatory activity of 1a–h was investigated by acute carrageenan-induced paw edema in mice using the reference drug indomethacin. The results obtained indicated that, of the derivatives developed, 1a and 1d–h exhibited significantly higher anti-inflammatory activity (26.81%–61.45%) when compared with the reference drug indomethacin (22.43%) ( P = 0.0490 for 1a, 0.0015 for 1d, 0.0330 for 1f, and P < 0.001 for 1e and 1h). Moreover, the ulcer incidence of 20% for 1e and 1h was clearly lower when compared with the indomethacin group (in which the ulcer incidence was 80%). Of particular note, the ulcer index of 0.2 for 1e was significantly less than that in the indomethacin group (0.6, P = 0.014). Additionally, prostaglandin E 2 (PGE 2) inhibitory properties were found to be high with 1e (68.32 pg/mL), significantly different from those of the placebo group (530.13 pg/mL, P < 0.001), and equipotent to the effect observed in the indomethacin-pretreated group (96.13 pg/mL, P > 0.05). Moreover, the PGE 2 level of 54.15 pg/mL with 1h was also significantly different from that of the placebo group ( P < 0.001) and of the indomethacin group ( P < 0.05). The significant inhibition of PGE 2 observed with 1e (68.32 pg/mL) and 1h (54.15 pg/mL) agree with their observed ulcer incidences. Our overall findings for N-phenylcarbamothioylbenzamides 1a–h clearly suggest that the compounds exhibit an anti-inflammatory effect, potently inhibit PGE 2 synthesis, and markedly demonstrate low ulcer incidence.

Carrageenin-induced edema in hind paw of the rat as an assay for antiiflammatory drugs.

Seon-Hwa Lim,  Eun Young Park,  Hye Koo … (2006)
Gardenia fruit has been traditionally used as a folk medicine for centuries in Asian countries. Extraction with ethanol was used to obtain an extract (GFE) that contains two known constituents, geniposide and genipin, which were subsequently evaluated for anti-inflammatory activity. GFE, genipin, and geniposide showed acute anti-inflammatory activities in carrageenan-induced rat paw edema. In a dose-dependent manner, GFE also inhibited vascular permeability induced by acetic acid. Both genipin and geniposide inhibited production of exudate and nitric oxide (NO) in the rat air pouch edema model. However, genipin possessed stronger anti-inflammatory activity than geniposide, as demonstrated by the results with carrageenan-induced rat paw edema, carrageenan-induced air pouch formation, and measurement of NO content in the exudates. GFE caused a dose-dependent inhibition of acetic acid-induced abdominal writhing in mice. Collectively, genipin, rather than geniposide, is the major anti-inflammatory component of gardenia fruit.

The formation of a structure with the features of synovial lining by subcutaneous injection of air: an in vivo tissue culture system.

Robert Edwards,  D Willoughby,  Whitney A Sedgwick (1981)
We have attempted to verify the suggestion that synovial membrane is the result of mechanical disruption of connective tissue, and may occur at any site. Mechanical disruption of the subcutaneous connective tissue was achieved in rats and mice by the repeated injection of air. The resulting cavities developed a lining structure with many of the features of synovial membrane as judged by electron microscopy, and light microscopy using haematoxylin and eosin and van Gieson stains, esterase activity and immunofluorescent staining for Ia antigen. A structure closely resembling synovium is formed as early as 6 days, providing a convenient method for studying large quantities of facsimile synovial tissue under a wide variety of easily administered stimuli.