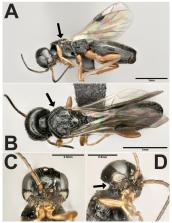 Vanhornia eucnemidarum Crawford is the only species of Vanhorniidae that occurs in North America. This species is rarely collected and thus the distribution is not well documented. Intending to uncover a more accurate range of this species, we assembled collection records from museums, personal collections and citizen science projects. Many of these records were non-digitised and had to be personally requested.

Here we expand the known distribution of V. eucnemidarum to include nine new provinces and states: Manitoba, Connecticut, Oregon, Mississippi, Missouri, New Hampshire, New Jersey, Texas and Wisconsin. Although Quebec has been listed as a previous locality, the recorded province was mislabelled, so Quebec is now also officially a provincial record.

The Value of Museum Collections for Research and Society

What we know and don't know about Earth's missing biodiversity.

Brett R Scheffers,  Lucas Joppa,  Stuart Pimm … (2012)
Estimates of non-microbial diversity on Earth range from 2 million to over 50 million species, with great uncertainties in numbers of insects, fungi, nematodes, and deep-sea organisms. We summarize estimates for major taxa, the methods used to obtain them, and prospects for further discoveries. Major challenges include frequent synonymy, the difficulty of discriminating certain species by morphology alone, and the fact that many undiscovered species are small, difficult to find, or have small geographic ranges. Cryptic species could be numerous in some taxa. Novel techniques, such as DNA barcoding, new databases, and crowd-sourcing, could greatly accelerate the rate of species discovery. Such advances are timely. Most missing species probably live in biodiversity hotspots, where habitat destruction is rife, and so current estimates of extinction rates from known species are too low. Copyright © 2012 Elsevier Ltd. All rights reserved.