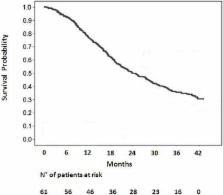 Materials and Methods: Sixty-one consecutive patients considered non-progressive after two cycles of induction chemotherapy were treated with a moderately escalated hypofractionated radiation course of 30 daily fractions of 2.25–2.28 Gy each administered in 6 weeks up to a total dose of 67.5–68.4 Gy (range, 64.5–71.3 Gy). Thirty-two received sequential RT after two more cycles (total = 4 cycles) of chemotherapy, while 29 were treated with concurrent chemo-radiation. The target was considered the gross tumor volume and the clinically proven nodal regions, without elective nodal irradiation.

Results: With a median follow up of 27 months (range 6–40), 1-year and 2-year OS rate for all patients was 77 and 53%, respectively, with a median survival duration of 18.6 months in the sequential group and 24.1 months in the concomitant group. No Grade ≥4 acute and late toxicity was reported. Acute Grade 3 treatment-related pneumonitis was detected in 10% of patients. Two patients, both receiving the concurrent schedule, developed a Grade 3 acute esophagitis. The overall incidence of late Grade 3 lung toxicity was 5%. No patients experienced a Grade 3 late esophageal toxicity.

LA Stewart,  JP Pignon (1995)
To evaluate the effect of cytotoxic chemotherapy on survival in patients with non-small cell lung cancer. Meta-analysis using updated data on individual patients from all available randomised trials, both published and unpublished. 9387 patients (7151 deaths) from 52 randomised clinical trials. Survival. The results for modern regimens containing cisplatin favoured chemotherapy in all comparisons and reached conventional levels of significance when used with radical radiotherapy and with supportive care. Trials comparing surgery with surgery plus chemotherapy gave a hazard ratio of 0.87 (13% reduction in the risk of death, equivalent to an absolute benefit of 5% at five years). Trials comparing radical radiotherapy with radical radiotherapy plus chemotherapy gave a hazard ratio of 0.87 (13% reduction in the risk of death; absolute benefit of 4% at two years), and trials comparing supportive care with supportive care plus chemotherapy 0.73 (27% reduction in the risk of death; 10% improvement in survival at one year). The essential drugs needed to achieve these effects were not identified. No difference in the size of effect was seen in any subgroup of patients. In all but the radical radiotherapy setting, older trials using long term alkylating agents tended to show a detrimental effect of chemotherapy. This effect reached conventional significance in the adjuvant surgical comparison. At the outset of this meta-analysis there was considerable pessimism about the role of chemotherapy in non-small cell lung cancer. These results offer hope of progress and suggest that chemotherapy may have a role in treating this disease.

Dorothy A. Sullivan,  Randall Ten Haken,  Dale Schipper … (2005)
To determine whether high-dose radiation leads to improved outcomes in patients with non-small-cell lung cancer (NSCLC). This analysis included 106 patients with newly diagnosed or recurrent Stages I-III NSCLC, treated with 63-103 Gy in 2.1-Gy fractions, using three-dimensional conformal radiation therapy (3D-CRT) per a dose escalation trial. Targets included the primary tumor and any lymph nodes > or =1 cm, without intentionally including negative nodal regions. Nineteen percent of patients (20/106) received neoadjuvant chemotherapy. Patient, tumor, and treatment factors were evaluated for association with outcomes. Estimated median follow-up was 8.5 years. Median survival was 19 months, and 5-year overall survival (OS) was 13%. Multivariate analysis revealed weight loss (p = 0.011) and radiation dose (p = 0.0006) were significant predictors for OS. The 5-year OS was 4%, 22%, and 28% for patients receiving 63-69, 74-84, and 92-103 Gy, respectively. Although presence of nodal disease was negatively associated with locoregional control under univariate analysis, radiation dose was the only significant predictor when multiple variables were included (p = 0.015). The 5-year control rate was 12%, 35%, and 49% for 63-69, 74-84, and 92-103 Gy, respectively. Higher dose radiation is associated with improved outcomes in patients with NSCLC treated in the range of 63-103 Gy.

Zhongxing Liao,  Ritsuko Komaki,  Howard D. Thames … (2010)
In 2004, our institution began using four-dimensional computed tomography (4DCT) simulation and then intensity-modulated radiotherapy (IMRT) (4DCT/IMRT) instead of three-dimensional conformal radiotherapy (3DCRT) for the standard treatment of non-small-cell lung cancer (NSCLC). This retrospective study compares disease outcomes and toxicity in patients treated with concomitant chemotherapy and either 4DCT/IMRT or 3DCRT. A total of 496 NSCLC patients have been treated at M. D. Anderson Cancer Center between 1999 and 2006 with concomitant chemoradiotherapy. Among these, 318 were treated with CT/3DCRT and 91 with 4DCT/IMRT. Both groups received a median dose of 63 Gy. Disease end points were locoregional progression (LRP), distant metastasis (DM), and overall survival (OS). Disease covariates were gross tumor volume (GTV), nodal status, and histology. The toxicity end point was Grade >or=3 radiation pneumonitis; toxicity covariates were GTV, smoking status, and dosimetric factors. Data were analyzed using Cox proportional hazards models. Mean follow-up times in the 4DCT/IMRT and CT/3DCRT groups were 1.3 (range, 0.1-3.2) and 2.1 (range, 0.1-7.9) years, respectively. The hazard ratios for 4DCT/IMRT were <1 for all disease end points; the difference was significant only for OS. The toxicity rate was significantly lower in the IMRT/4DCT group than in the CT/3DCRT group. V20 was significantly higher in the 3DCRT group and was a significant factor in determining toxicity. Freedom from DM was nearly identical in both groups. Treatment with 4DCT/IMRT was at least as good as that with 3DCRT in terms of the rates of freedom from LRP and DM. There was a significant reduction in toxicity and a significant improvement in OS. Published by Elsevier Inc.

This article was submitted to Radiation Oncology, a section of the journal Frontiers in Oncology.