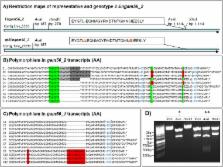 The genus Eimeria (Apicomplexa, Coccidia) provides a wide range of different species with different hosts to study common and variable features within the genus and its species. A common characteristic of all known Eimeria species is the oocyst, the infectious stage where its life cycle starts and ends. In our study, we utilized Eimeria nieschulzi as a model organism. This rat-specific parasite has complex oocyst morphology and can be transfected and even cultivated in vitro up to the oocyst stage. We wanted to elucidate how the known oocyst wall-forming proteins are preserved in this rodent Eimeria species compared to other Eimeria. In newly obtained genomics data, we were able to identify different gametocyte genes that are orthologous to already known gam genes involved in the oocyst wall formation of avian Eimeria species. These genes appeared putatively as single exon genes, but cDNA analysis showed alternative splicing events in the transcripts. The analysis of the translated sequence revealed different conserved motifs but also dissimilar regions in GAM proteins, as well as polymorphic regions. The occurrence of an underrepresented gam56 gene version suggests the existence of a second distinct E. nieschulzi genotype within the E. nieschulzi Landers isolate that we maintain.

Katherine Sorber,  Michelle T. Dimon,  Joseph L. DeRisi (2011)
Over 50% of genes in Plasmodium falciparum, the deadliest human malaria parasite, contain predicted introns, yet experimental characterization of splicing in this organism remains incomplete. We present here a transcriptome-wide characterization of intraerythrocytic splicing events, as captured by RNA-Seq data from four timepoints of a single highly synchronous culture. Gene model-independent analysis of these data in conjunction with publically available RNA-Seq data with HMMSplicer, an in-house developed splice site detection algorithm, revealed a total of 977 new 5′ GU-AG 3′ and 5 new 5′ GC-AG 3′ junctions absent from gene models and ESTs (11% increase to the current annotation). In addition, 310 alternative splicing events were detected in 254 (4.5%) genes, most of which truncate open reading frames. Splicing events antisense to gene models were also detected, revealing complex transcriptional arrangements within the parasite’s transcriptome. Interestingly, antisense introns overlap sense introns more than would be expected by chance, perhaps indicating a functional relationship between overlapping transcripts or an inherent organizational property of the transcriptome. Independent experimental validation confirmed over 30 new antisense and alternative junctions. Thus, this largest assemblage of new and alternative splicing events to date in Plasmodium falciparum provides a more precise, dynamic view of the parasite’s transcriptome.

The coccidian oocyst: a tough nut to crack!

Sabina Belli,  Kellie N Smith,  David J. P. Ferguson (2006)
Coccidian parasites are transmitted between hosts by the ingestion of food or water contaminated with oocysts, followed by the release of infectious sporozoites and invasion of the gastro-intestinal tract. In the external environment, sporozoites are protected from desiccation and chemical disinfection by the oocyst wall. This unique structure guarantees successful disease transmission and is as vital to the coccidian parasite as the exoskeleton is to insects--without it they would die. Here, we revisit the early work and combine it with newer molecular data to describe our present understanding of the coccidian oocyst wall.

Robert Walker,  Philippa Sharman,  Catherine M D Miller … (2015)
Background The protozoan Eimeria tenella is a common parasite of chickens, causing avian coccidiosis, a disease of on-going concern to agricultural industries. The high prevalence of E. tenella can be attributed to the resilient oocyst stage, which is transmitted between hosts in the environment. As in related Coccidia, development of the eimerian oocyst appears to be dependent on completion of the parasite’s sexual cycle. RNA Seq transcriptome profiling offers insights into the mechanisms governing the biology of E. tenella sexual stages (gametocytes) and the potential to identify targets for blocking parasite transmission. Results Comparisons between the sequenced transcriptomes of E. tenella gametocytes and two asexual developmental stages, merozoites and sporozoites, revealed upregulated gametocyte transcription of 863 genes. Many of these genes code for proteins involved in coccidian sexual biology, such as oocyst wall biosynthesis and fertilisation, and some of these were characterised in more depth. Thus, macrogametocyte-specific expression and localisation was confirmed for two proteins destined for incorporation into the oocyst wall, as well as for a subtilisin protease and an oxidoreductase. Homologues of an oocyst wall protein and oxidoreductase were found in the related coccidian, Toxoplasma gondii, and shown to be macrogametocyte-specific. In addition, a microgametocyte gamete fusion protein, EtHAP2, was discovered. Conclusions The need for novel vaccine candidates capable of controlling coccidiosis is rising and this panel of gametocyte targets represents an invaluable resource for development of future strategies to interrupt parasite transmission, not just in Eimeria but in other Coccidia, including Toxoplasma, where transmission blocking is a relatively unexplored strategy. Electronic supplementary material The online version of this article (doi:10.1186/s12864-015-1298-6) contains supplementary material, which is available to authorized users.