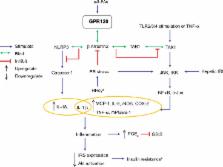 Free fatty acids (FFAs) serve not only as nutrients that provide energy but also as extracellular signaling molecules that manipulate intracellular physiological events through FFA receptors (FFARs) such as FFAR4. FFAR4 is also known as G-protein coupled receptor 120 (GPR120). The main role of GPR120 is to elicit FFA regulation on metabolism homeostasis. GPR120 agonism correlates with prevention of the occurrence and development of metabolic disorders such as obesity and diabetes. GPR120 activation directly or indirectly inhibits inflammation, modulates hormone secretion from the gastrointestinal tract and pancreas, and regulates lipid and/or glucose metabolism in adipose, liver, and muscle tissues, which may help prevent obesity and diabetes. This review summarizes recent advances in physiological roles of GPR120 in preventing insulin resistance and protecting pancreatic islet function, and examines how resident GPR120 in the pancreas may be involved in modulating pancreatic islet function.

Identification of a lipokine, a lipid hormone linking adipose tissue to systemic metabolism.

Marc Y. Donath,  Françoise Homo-Delarche,  Aurel Perren … (2007)
Activation of the innate immune system in obesity is a risk factor for the development of type 2 diabetes. The aim of the current study was to investigate the notion that increased numbers of macrophages exist in the islets of type 2 diabetes patients and that this may be explained by a dysregulation of islet-derived inflammatory factors. Increased islet-associated immune cells were observed in human type 2 diabetic patients, high-fat-fed C57BL/6J mice, the GK rat, and the db/db mouse. When cultured islets were exposed to a type 2 diabetic milieu or when islets were isolated from high-fat-fed mice, increased islet-derived inflammatory factors were produced and released, including interleukin (IL)-6, IL-8, chemokine KC, granulocyte colony-stimulating factor, and macrophage inflammatory protein 1alpha. The specificity of this response was investigated by direct comparison to nonislet pancreatic tissue and beta-cell lines and was not mimicked by the induction of islet cell death. Further, this inflammatory response was found to be biologically functional, as conditioned medium from human islets exposed to a type 2 diabetic milieu could induce increased migration of monocytes and neutrophils. This migration was blocked by IL-8 neutralization, and IL-8 was localized to the human pancreatic alpha-cell. Therefore, islet-derived inflammatory factors are regulated by a type 2 diabetic milieu and may contribute to the macrophage infiltration of pancreatic islets that we observe in type 2 diabetes.