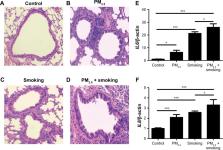 Exposure to environmental particulate matter (PM) ≤2.5 μm in diameter (PM 2.5) and smoking are common contributors to COPD, and pertinent research implicates both factors in pulmonary inflammation. Using in vivo mouse and in vitro human cellular models, we investigated the joint impact of PM 2.5 pollution, and cigarette smoke (CS) in mice or cigarette-smoke extract (CSE) in cells on COPD inflammation, and explored potential mechanisms.

Tissue changes in lungs of C57BL/6 mice exposed to PM 2.5 and CS were studied by light microscopy, H&E, immunochemistry, and immunofluorescence-stained sections. Levels of inflammatory factors induced by PM 2.5/CS in mice and PM 2.5/CSE in 16HBE cells were also monitored by quantitative reverse-transcription (qRT)-PCR and ELISA. Expression of genes related to the Wnt5a-signaling pathway was assessed at transcriptional and protein levels using immunofluorescence, qRT-PCR, and Western blotting.

Inflammatory response to combined exposure of PM 2.5 and CS or CSE in mouse and 16HBE cells surpassed responses incited separately. Although separate PM 2.5 and CS/CSE exposure upregulated the expression of Wnt5a (a member of the Wnt-secreted glycoprotein family), combined PM 2.5 and CS/CSE exposure produced a steeper rise in Wnt5a levels. Use of a Wnt5a antagonist (BOX5) successfully blocked related inflammatory effects. ERK phosphorylation appeared to mediate the effects of Wnt5a in the COPD model, promoting PM 2.5 aggravation of CS/CSE-induced airway inflammation.

Our findings suggest that combined PM 2.5 and CS/CSE exposure induce airway inflammation and Wnt5a expression in vivo in mice and in vitro in 16HBE cells. Furthermore, PM 2.5 seems to aggravate CS/CSE-induced inflammation via the Wnt5a–ERK pathway in the context of COPD.

Prescott Woodruff,  Àlvar Agustí,  Nicolas Roche … (2015)
Chronic obstructive pulmonary disease (COPD) is a common, complex, and heterogeneous disorder that is responsible for substantial and growing morbidity, mortality, and health-care expense worldwide. Of imperative importance to decipher the complexity of COPD is to identify groups of patients with similar clinical characteristics, prognosis, or therapeutic needs, the so-called clinical phenotypes. This strategy is logical for research but might be of little clinical value because clinical phenotypes can overlap in the same patient and the same clinical phenotype could result from different biological mechanisms. With the goal to match assessment with treatment choices, the latest iteration of guidelines from the Global Initiative for Chronic Obstructive Lung Disease reorganised treatment objectives into two categories: to improve symptoms (ie, dyspnoea and health status) and to decrease future risk (as predicted by forced expiratory volume in 1 s level and exacerbations history). This change thus moves treatment closer to individualised medicine with available bronchodilators and anti-inflammatory drugs. Yet, future treatment options are likely to include targeting endotypes that represent subtypes of patients defined by a distinct pathophysiological mechanism. Specific biomarkers of these endotypes would be particularly useful in clinical practice, especially in patients in which clinical phenotype alone is insufficient to identify the underlying endotype. A few series of potential COPD endotypes and biomarkers have been suggested. Empirical knowledge will be gained from proof-of-concept trials in COPD with emerging drugs that target specific inflammatory pathways. In every instance, specific endotype and biomarker efforts will probably be needed for the success of these trials, because the pathways are likely to be operative in only a subset of patients. Network analysis of human diseases offers the possibility to improve understanding of disease pathobiological complexity and to help with the development of new treatment alternatives and, importantly, a reclassification of complex diseases. All these developments should pave the way towards personalised treatment of patients with COPD in the clinic.

Changgong Li,  Jing Jing Xiao,  Khadija Hormi … (2002)
Operational parallels in overall mechanisms of three-dimensional patterning of vertebrate organs are becoming increasingly apparent. Many key mediators, such as FGFs, BMPs, and sonic hedgehog, participate in organization of a number of organs, including the lungs, which exhibit a defined proximodistal (P-D) polarity. Recently, Wnt5a a member of the wingless family of signaling molecules involved in cell proliferation, differentiation, and organogenesis, was shown to underlie the outgrowth and P-D morphogenesis of the vertebrate limb. In the current study, we show that Wnt5a is expressed in the mouse lung and plays an important role in lung distal morphogenesis. Analysis of the mutant phenotype in mice carrying a targeted disruption of the Wnt5a locus shows distinct abnormalities in distal lung morphogenesis as manifested by distinct truncation of the trachea and overexpansion of the distal respiratory airways. In the face of deleted WNT5a activity, both epithelial and mesenchymal cell compartments of the Wnt5a(-/-) lungs exhibit increased cell proliferation. The overall architecture of the mutant lungs is characterized by overexpansion of the distal airways and inhibition of lung maturation as reflected by persistence of thickened intersaccular interstitium. Absence of WNT5a activity in the mutant lungs leads to increased expression of Fgf-10, Bmp4, Shh, and its receptor Ptc, raising the possibility that WNT5a, FGF-10, BMP4, and SHH signaling pathways are functionally interactive.

Samuel Valença,  Carlos Magalhães,  Débora S. Faffe … (2011)
Air pollution is associated with morbidity and mortality induced by respiratory diseases. However, the mechanisms therein involved are not yet fully clarified. Thus, we tested the hypothesis that a single acute exposure to low doses of fine particulate matter (PM2.5) may induce functional and histological lung changes and unchain inflammatory and oxidative stress processes. PM2.5 was collected from the urban area of São Paulo city during 24 h and underwent analysis for elements and polycyclic aromatic hydrocarbon contents. Forty-six male BALB/c mice received intranasal instillation of 30 μL of saline (CTRL) or PM2.5 at 5 or 15 μg in 30 μL of saline (P5 and P15, respectively). Twenty-four hours later, lung mechanics were determined. Lungs were then prepared for histological and biochemical analysis. P15 group showed significantly increased lung impedance and alveolar collapse, as well as lung tissue inflammation, oxidative stress and damage. P5 presented values between CTRL and P15: higher mechanical impedance and inflammation than CTRL, but lower inflammation and oxidative stress than P15. In conclusion, acute exposure to low doses of fine PM induced lung inflammation, oxidative stress and worsened lung impedance and histology in a dose-dependent pattern in mice.