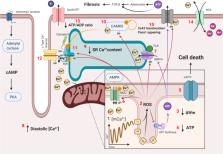 K I E M Wijffels,  C Kirchhof,  R Dorland … (1995)
In this study we tested the hypothesis that atrial fibrillation (AF) causes electrophysiological changes of the atrial myocardium which might explain the progressive nature of the arrhythmia. Twelve goats were chronically instrumented with multiple electrodes sutured to the epicardium of both atria. Two to 3 Weeks after implantation, the animals were connected to a fibrillation pacemaker which artificially maintained AF. Whereas during control episodes of AF were short lasting (6 +/- 3 seconds), artificial maintenance of AF resulted in a progressive increase in the duration of AF to become sustained (> 24 hours) after 7.1 +/- 4.8 days (10 of 11 goats). During the first 24 hours of AF the median fibrillation interval shortened from 145 +/- 18 to 108 +/- 8 ms and the inducibility of AF by a single premature stimulus increased from 24% to 76%. The atrial effective refractory period (AERP) shortened from 146 +/- 19 to 95 +/- 20 ms (-35%) (S1S1, 400 ms). At high pacing rates the shortening was less (-12%), pointing to a reversion of the normal adaptation of the AERP to heart rate. In 5 goats, after 2 to 4 weeks of AF, sinus rhythm was restored and all electrophysiological changes were found to be reversible within 1 week. Artificial maintenance of AF leads to a marked shortening of AERP, a reversion of its physiological rate adaptation, and an increase in rate, inducibility and stability of AF. All these changes were completely reversible within 1 week of sinus rhythm.

Aging: a theory based on free radical and radiation chemistry.

Role of oxidative stress in cardiac hypertrophy and remodeling.

This article was submitted to Cellular Biochemistry, a section of the journal Frontiers in Cell and Developmental Biology