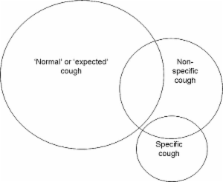 Worldwide paediatricians advocate that children should be managed differently from adults. In this article, similarities and differences between children and adults related to cough are presented. Physiologically, the cough pathway is closely linked to the control of breathing (the central respiratory pattern generator). As respiratory control and associated reflexes undergo a maturation process, it is expected that the cough would likewise undergo developmental stages as well. Clinically, the 'big three' causes of chronic cough in adults (asthma, post-nasal drip and gastroesophageal reflux) are far less common causes of chronic cough in children. This has been repeatedly shown by different groups in both clinical and epidemiological studies. Therapeutically, some medications used empirically for cough in adults have little role in paediatrics. For example, anti-histamines (in particular H 1 antagonists) recommended as a front-line empirical treatment of chronic cough in adults have no effect in paediatric cough. Instead it is associated with adverse reactions and toxicity. Similarly, codeine and its derivatives used widely for cough in adults are not efficacious in children and are contraindicated in young children. Corticosteroids, the other front-line empirical therapy recommended for adults, are also minimally (if at all) efficacious for treating non-specific cough in children. In summary, current data support that management guidelines for paediatric cough should be different to those in adults as the aetiological factors and treatment in children significantly differ to those in adults.

Romain Pauwels,  Søren Møller Pedersen,  William Busse … (2003)
Although inhaled glucocorticosteroids are recommended for persistent asthma, their long-term effect on recent onset, mild, persistent asthma has yet to be established. We did a randomised, double-blind clinical trial in 7241 patients in 32 countries to assess the effects of budesonide in patients who had had mild persistent asthma for less than 2 years and who had not had previous regular treatment with glucocorticosteroids. Patients aged 5-66 years received either budesonide or placebo once daily for 3 years in addition to their usual asthma medications. The daily budesonide dose was 400 microg, or 200 microg for children younger than 11 years. The primary outcome was time to first severe asthma-related event, and analysis was by intention to treat. 198 of 3568 patients on placebo and 117 of 3597 on budesonide had at least one severe asthma exacerbation; hazard ratio 0.56 (95% CI 0.45-0.71, p<0.0001). Patients on budesonide had fewer courses of systemic corticosteroids and more symptom-free days than did those on placebo. Compared with placebo, budesonide increased postbronchodilator forced expiratory volume in 1 s (FEV1) from baseline by 1.48% (p<0.0001) after 1 year and by 0.88% (p=0.0005) after 3 years (expressed as percent of the predicted value). The corresponding increase in prebronchodilator FEV1 was 2.24% after 1 year and 1.71% after 3 years (p<0.0001 at both timepoints). The effect of treatment on all outcome variables was independent of the baseline lung function (prebronchodilator or postbronchodilator) or baseline medication. In children younger than 11 years, 3-year growth was reduced in the budesonide group by 1.34 cm. The reduction was greatest in the first year of treatment (0.58 cm) than years 2 and 3 (0.43 cm and 0.33 cm, respectively). Long-term, once-daily treatment with low-dose budesonide decreases the risk of severe exacerbations and improves asthma control in patients with mild persistent asthma of recent onset.