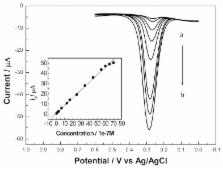 An improvement of selectivity for electrochemical detection of dopamine (DA) with differential pulse voltammetry is achieved by covalently modifying a glassy carbon electrode (GCE) with O-carboxymethylchitosan (OCMCS). The amphiphilic chitosan provides electrostatic accumulation of DA onto the electrode surface. In a phosphate buffer solution (pH 6.0), a pair of well-defined reversible redox waves of DA was observed at the OCMCS/GCE with a Δ E p of 52 mV. The anodic peak current obtained from the differential pulse voltammetry of dopamine was linearly dependent on its concentration in the range of 6.0 × 10 -8 to 7.0 × 10 -6 M, with a correlation coefficient of 0.998. The detection limit (S/N = 3) was found to be 1.5 × 10 -9 M. The modified electrode had been applied to the determination of DA in human serum samples with satisfactory results.

Selective detection of dopamine in the presence of ascorbic acid and uric acid by a carbon nanotubes-ionic liquid gel modified electrode.

Zhiwei Zhu,  Yuqian Gao,  Y.-Y. Kou … (2005)
The electrochemistry of dopamine (DA) was studied by cyclic voltammetry at a glassy carbon electrode modified by a gel containing multi-walled carbon nanotubes (MWNTs) and room-temperature ionic liquid of 1-octyl-3-methylimidazolium hexafluorophosphate (OMIMPF(6)). The thickness of gel on the surface of the electrode has to be controlled carefully because the charging currents increase with the modified layer being thicker. The anodic peaks of DA, ascorbic acid (AA) and uric acid (UA) in their mixture can be well separated since the peak potential of AA is shifted to more negative values, while that of UA is shifted to more positive values due to the modified electrode. At pH 7.08 the three peaks are separated ca. 0.20 and 0.15V, respectively; hence DA can be determined in the presence of UA and more than 100 times excess of AA. Under optimum conditions linear calibration graphs were obtained over the DA concentration range 1.0x10(-6) to 1.0x10(-4)M. The detection limit of the current technique was found to be 1.0x10(-7)M based on the signal-to-noise ratio of 3. The modified electrode has been successfully applied for the assay of DA in human blood serum. This work provides a simple and easy approach to selectively detect dopamine in the presence of ascorbic acid and uric acid.

Polyeugenol-modified platinum electrode for selective detection of dopamine in the presence of ascorbic Acid.

G Milczarek,  A Ciszewski (1999)
A platinum electrode was modified with electropolymerized films of 4-allyl-2-methoxyphenol (eugenol) by its oxidative polymerization from an alkaline solution by cyclic voltammetry. The modified electrode was than used to determine dopamine (DA) in an excess of ascorbic acid (AA) by differential pulse voltammetry. The peak positions as well as relative sensitivity DA/AA were affected by the potential window applied for the polymerization. For polymerization between 0 and 2.2 V, the peak potentials recorded in a phosphate buffer solution (pH 7.4) were -61 and +152 mV vs Ag/AgCl for AA and DA, respectively. After a 5-min equilibration, relative sensitivity DA/AA was 164 and the current sensitivity for DA was 7.9 nA μM(-)(1). The detection limit for S/N = 3 is 0.1 μM. The high selectivity and sensitivity for DA was found to be due to charge discrimination/analyte accumulation and an effect of catalytic mediation of redox sites. Chronocoulometric data reveal that DA is accumulated on the electrode as a monolayer. The electrode is stable, reversible, and free of fouling problems.

[* ] Authors to whom correspondence should be addressed.

Reproduction is permitted for noncommercial purposes.