Precision medicine in COPD: where are we and where do we need to go? 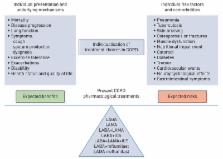 Chronic obstructive pulmonary disease (COPD) was the fourth leading cause of death worldwide in 2015. Current treatments for patients ease discomfort and help decrease disease progression; however, none improve lung function or change mortality. COPD is heterogeneous in its molecular and clinical presentation, making it difficult to understand disease aetiology and define robust therapeutic strategies. Given the complexity of the disease we propose a precision medicine approach to understanding and better treating COPD. It is possible that multiOMICs can be used as a tool to integrate data from multiple fields. Moreover, analysis of electronic medical records could aid in the treatment of patients and in the predictions of outcomes. The Precision Medicine Initiative created in 2015 has made precision medicine approaches to treat disease a reality; one of these diseases being COPD.

Association of cytochrome P450 2C19 genotype with the antiplatelet effect and clinical efficacy of clopidogrel therapy.

Coleen Damcott,  Ruth Pakyz,  Quince Gibson … (2009)
Clopidogrel therapy improves cardiovascular outcomes in patients with acute coronary syndromes and following percutaneous coronary intervention by inhibiting adenosine diphosphate (ADP)-dependent platelet activation. However, nonresponsiveness is widely recognized and is related to recurrent ischemic events. To identify gene variants that influence clopidogrel response. In the Pharmacogenomics of Antiplatelet Intervention (PAPI) Study (2006-2008), we administered clopidogrel for 7 days to 429 healthy Amish persons and measured response by ex vivo platelet aggregometry. A genome-wide association study was performed followed by genotyping the loss-of-function cytochrome P450 (CYP) 2C19*2 variant (rs4244285). Findings in the PAPI Study were extended by examining the relation of CYP2C19*2 genotype to platelet function and cardiovascular outcomes in an independent sample of 227 patients undergoing percutaneous coronary intervention. ADP-stimulated platelet aggregation in response to clopidogrel treatment and cardiovascular events. Platelet response to clopidogrel was highly heritable (h(2) = 0.73; P < .001). Thirteen single-nucleotide polymorphisms on chromosome 10q24 within the CYP2C18-CYP2C19-CYP2C9-CYP2C8 cluster were associated with diminished clopidogrel response, with a high degree of statistical significance (P = 1.5 x 10(-13) for rs12777823, additive model). The rs12777823 polymorphism was in strong linkage disequilibrium with the CYP2C19*2 variant, and was associated with diminished clopidogrel response, accounting for 12% of the variation in platelet aggregation to ADP (P = 4.3 x 10(-11)). The relation between CYP2C19*2 genotype and platelet aggregation was replicated in clopidogrel-treated patients undergoing coronary intervention (P = .02). Furthermore, patients with the CYP2C19*2 variant were more likely (20.9% vs 10.0%) to have a cardiovascular ischemic event or death during 1 year of follow-up (hazard ratio, 2.42; 95% confidence interval, 1.18-4.99; P = .02). CYP2C19*2 genotype was associated with diminished platelet response to clopidogrel treatment and poorer cardiovascular outcomes.

Blood eosinophil count and exacerbations in severe chronic obstructive pulmonary disease after withdrawal of inhaled corticosteroids: a post-hoc analysis of the WISDOM trial

Henrik Watz,  Kay Tetzlaff,  Emiel F. M. Wouters … (2016)
Blood eosinophil counts might predict response to inhaled corticosteroids (ICS) in patients with chronic obstructive pulmonary disease (COPD) and a history of exacerbations. We used data from the WISDOM trial to assess whether patients with COPD with higher blood eosinophil counts would be more likely to have exacerbations if ICS treatment was withdrawn.

Author contributions: All authors contributed to the conception and design of the manuscript.

ERR articles are open access and distributed under the terms of the Creative Commons Attribution Non-Commercial Licence 4.0.