Crassostrea gigas mortality in France: the usual suspect, a herpes virus, may not be the killer in this polymicrobial opportunistic disease 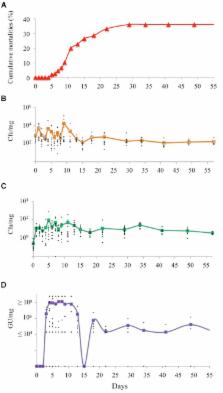 Successive disease outbreaks in oyster ( Crassostrea gigas) beds in France have resulted in dramatic losses in production, and subsequent decline in the oyster-farming industry. Deaths of juvenile oysters have been associated with the presence of a herpes virus (OsHV-1 μvar) and bacterial populations of the genus Vibrio. Although the pathogenicity of OsHV-1 μvar, as well as several strains of Vibrio has been demonstrated by experimental infections, our understanding of the complexity of infections occurring in the natural environment remains limited. In the present study, we use specific-pathogen-free (SPF) oysters infected in an estuarine environment to study the diversity and dynamics of cultured microbial populations during disease expression. We observe that rapid Vibrio colonization followed by viral replication precedes oyster death. No correlation was found between the vibrio concentration and viral load in co-infected animals. We show that the quantity of viral DNA is a predictor of mortality, however, in the absence of bacteria, a high load of herpes virus is not sufficient to induce the full expression of the disease. In addition, we demonstrate that juvenile mortalities can occur in the absence of herpes virus, indicating that the herpes virus appears neither essential nor sufficient to cause juvenile deaths; whereas bacteria are necessary for the disease. Finally, we demonstrate that oysters are a reservoir of putative pathogens, and that the geographic origin, age, and cultivation method of oysters influence disease expression.

Detection and description of a particular Ostreid herpesvirus 1 genotype associated with massive mortality outbreaks of Pacific oysters, Crassostrea gigas, in France in 2008.

Tristan Renault,  Jean-François Pépin,  Amélie Segarra … (2010)
Ostreid herpesvirus 1 (OsHV-1) infections have been reported around the world and are associated with high mortalities of the Pacific oyster (Crassostrea gigas). In the summer 2008, abnormal mortality rates ranging from 80% to 100% were reported in France and affected only Pacific oysters. Analyses of oyster samples collected during mortality outbreaks demonstrated a significant detection of OsHV-1 (75% of analysed batches), which appeared stronger than previous years. DNA sequencing based on C and IA regions was carried out on 28 batches of OsHV-1 infected Pacific oysters collected in 2008. Polymorphisms were described in both the C and IA regions and characterized a genotype of OsHV-1 not already reported and termed OsHV-1 microVar. A microsatellite zone present in the C region showed several deletions. Additionally, 44 isolates collected in France and in the USA, from 1995 to 2007 were sequenced and compared to the 2008 sequences. The analyses of 76 sequences showed OsHV-1 microVar detection only in 2008 isolates. These data suggest that OsHV-1 microVar can be assumed as an emergent genotype. (c) 2010 Elsevier B.V. All rights reserved.

Hemolymph microbiome of Pacific oysters in response to temperature, temperature stress and infection.

K Wegner,  Ana Lokmer (2015)
Microbiota provide their hosts with a range of beneficial services, including defense from external pathogens. However, host-associated microbial communities themselves can act as a source of opportunistic pathogens depending on the environment. Marine poikilotherms and their microbiota are strongly influenced by temperature, but experimental studies exploring how temperature affects the interactions between both parties are rare. To assess the effects of temperature, temperature stress and infection on diversity, composition and dynamics of the hemolymph microbiota of Pacific oysters (Crassostrea gigas), we conducted an experiment in a fully-crossed, three-factorial design, in which the temperature acclimated oysters (8 or 22 °C) were exposed to temperature stress and to experimental challenge with a virulent Vibrio sp. strain. We monitored oyster survival and repeatedly collected hemolymph of dead and alive animals to determine the microbiome composition by 16s rRNA gene amplicon pyrosequencing. We found that the microbial dynamics and composition of communities in healthy animals (including infection survivors) were significantly affected by temperature and temperature stress, but not by infection. The response was mediated by changes in the incidence and abundance of operational taxonomic units (OTUs) and accompanied by little change at higher taxonomic levels, indicating dynamic stability of the hemolymph microbiome. Dead and moribund oysters, on the contrary, displayed signs of community structure disruption, characterized by very low diversity and proliferation of few OTUs. We can therefore link short-term responses of host-associated microbial communities to abiotic and biotic factors and assess the potential feedback between microbiota dynamics and host survival during disease.

Introduction into France of the Japanese oyster (Crassostrea gigas)

This article was submitted to Aquatic Microbiology, a section of the journal Frontiers in Microbiology