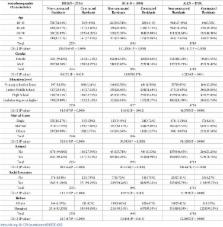 China adopted family doctor (FD) to help achieve “Healthy China 2030” through providing continuous, comprehensive, and life-cycle contract services. However, there is a disparity between actual and targeted FD use, as residents continue to visit specialists in large hospitals. The government implemented initiatives to improve residents’ willingness to sign up with and visit their FDs. Factors that influence contract behavior are therefore significant for frontier policy research.

Two survey waves were conducted in Shanghai (2013 and 2016). The first wave included 2754 people and the second 1995 people. Exploratory factor analysis was used to synthesize “satisfaction” as a predictor of contract behavior. Pearson’s chi-square, pooled and logistic regression models were used to estimate associations between influencing factors and contract behavior, and clarify variations in factors across the two waves.

Except for the socio-demographic variables, NCD, awareness of FD services, satisfaction and visit compliance were significant predictors of contract behavior with FDs. The effect of visit compliance had increased over time while NCD and awareness of FD services were losing impact over time. Significant satisfaction factors had also changed from “Treatment Environment” and “Service Specification” to “Service Attitude”.

Raymond Andersen,  Jens K Pedersen,  Jens Søndergaard (2012)
General practice is the corner stone of Danish primary health care. General practitioners (GPs) are similar to family physicians in the United States. On average, all Danes have 6.9 contacts per year with their GP (in-person, telephone, or E-mail consultation). General practice is characterized by 5 key components: (1) a list system, with an average of close to 1600 persons on the list of a typical GP; (2) the GP as gatekeeper and first-line provider in the sense that a referral from a GP is required for most office-based specialists and always for in- and outpatient hospital treatment; (3) an after-hours system staffed by GPs on a rota basis; (4) a mixed capitation and fee-for-service system; and (5) GPs are self-employed, working on contract for the public funder based on a national agreement that details not only services and reimbursement but also opening hours and required postgraduate education. The contract is (re)negotiated every 2 years. General practice is embedded in a universal tax-funded health care system in which GP and hospital services are free at the point of use. The current system has evolved over the past century and has shown an ability to adapt flexibly to new challenges. Practice units are fairly small: close to 2 GPs per unit plus nurses and secretaries. The units are fully computerized, that is, with computer-based patient records and submission of prescriptions digitally to pharmacies etc. Over the past few years a decrease in solo practices has been seen and is expected to accelerate, in part because of the GP age structure, with many GPs retiring and new GPs not wanting to practice alone. This latter workforce trend is pointing toward a new model with employed GPs, particularly in rural areas.

The contribution of primary care systems to health outcomes within Organization for Economic Cooperation and Development (OECD) countries, 1970-1998.

Leiyu Shi,  Barbara Starfield,  James Macinko (2003)
To assess the contribution of primary care systems to a variety of health outcomes in 18 wealthy Organization for Economic Cooperation and Development (OECD) countries over three decades. Data were primarily derived from OECD Health Data 2001 and from published literature. The unit of analysis is each of 18 wealthy OECD countries from 1970 to 1998 (total n = 504). Pooled, cross-sectional, time-series analysis of secondary data using fixed effects regression. Secondary analysis of public-use datasets. Primary care system characteristics were assessed using a common set of indicators derived from secondary datasets, published literature, technical documents, and consultation with in-country experts. The strength of a country's primary care system was negatively associated with (a) all-cause mortality, (b) all-cause premature mortality, and (c) cause-specific premature mortality from asthma and bronchitis, emphysema and pneumonia, cardiovascular disease, and heart disease (p<0.05 in fixed effects, multivariate regression analyses). This relationship was significant, albeit reduced in magnitude, even while controlling for macro-level (GDP per capita, total physicians per one thousand population, percent of elderly) and micro-level (average number of ambulatory care visits, per capita income, alcohol and tobacco consumption) determinants of population health. (1) Strong primary care system and practice characteristics such as geographic regulation, longitudinality, coordination, and community orientation were associated with improved population health. (2) Despite health reform efforts, few OECD countries have improved essential features of their primary care systems as assessed by the scale used here. (3) The proposed scale can also be used to monitor health reform efforts intended to improve primary care.

Juan Chen (2011)
This study re-examines the healthy migrant phenomenon in China's internal migration process and investigates the different trajectories of place of origin on migrants' self-rated physical health and psychological distress. Data came from a household survey (N = 1474) conducted in Beijing between May and October in 2009. Multiple regression techniques were used to model the associations between self-rated physical health, psychological distress, and migration experience, controlling for sociodemographic characteristics. The healthy migrant phenomenon was observed among migrants on self-rated physical health but not on psychological distress. Different health status trajectories existed between physical health versus mental health and between rural-to-urban migrants versus urban-to-urban migrants. The study draws particular attention to the diminishing physical health advantage and the initial high level of psychological distress among urban-to-urban migrants. The initial physical health advantage indicates that it is necessary to reach out to the migrant population and provide equal access to health services in the urban area. The high level of psychological distress suggests that efforts targeting mental health promotion and mental disorder prevention among the migrant population are an urgent need. The findings of the study underline the necessity to make fundamental changes to the restrictive hukou system and the unequal distribution of resources and opportunities in urban and rural areas. These changes will lessen the pressure on big cities and improve the living conditions and opportunities of residents in townships/small cities and the countryside. Copyright © 2011 Elsevier Ltd. All rights reserved.

Data Availability The data generated and analyzed during the present study are not publicly available because of data sensitiveness. However, they are available from the Academic Ethics Committee of Shanghai Pudong Institute for Health Development (via yanhua373@ 123456126.com ) for researchers who meet the criteria for access to confidential data.
Data availability:
ScienceOpen disciplines: Uncategorized