The UK Standardisation of Breast Radiotherapy (START) Trial A of radiotherapy hypofractionation for treatment of early breast cancer: a randomised trial 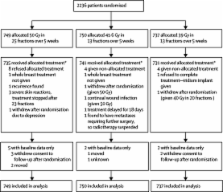 The international standard radiotherapy schedule for breast cancer treatment delivers a high total dose in 25 small daily doses (fractions). However, a lower total dose delivered in fewer, larger fractions (hypofractionation) is hypothesised to be at least as safe and effective as the standard treatment. We tested two dose levels of a 13-fraction schedule against the standard regimen with the aim of measuring the sensitivity of normal and malignant tissues to fraction size.

Between 1998 and 2002, 2236 women with early breast cancer (pT1-3a pN0-1 M0) at 17 centres in the UK were randomly assigned after primary surgery to receive 50 Gy in 25 fractions of 2·0 Gy versus 41·6 Gy or 39 Gy in 13 fractions of 3·2 Gy or 3·0 Gy over 5 weeks. Women were eligible if they were aged over 18 years, did not have an immediate surgical reconstruction, and were available for follow-up. Randomisation method was computer generated and was not blinded. The protocol-specified principal endpoints were local-regional tumour relapse, defined as reappearance of cancer at irradiated sites, late normal tissue effects, and quality of life. Analysis was by intention to treat. This study is registered as an International Standard Randomised Controlled Trial, number ISRCTN59368779.

The data are consistent with the hypothesis that breast cancer and the dose-limiting normal tissues respond similarly to change in radiotherapy fraction size. 41·6 Gy in 13 fractions was similar to the control regimen of 50 Gy in 25 fractions in terms of local-regional tumour control and late normal tissue effects, a result consistent with the result of START Trial B. A lower total dose in a smaller number of fractions could offer similar rates of tumour control and normal tissue damage as the international standard fractionation schedule of 50 Gy in 25 fractions.

Laval Grimard,  W. Shelley,  Sunil P P Gulavita … (2002)
Breast irradiation after lumpectomy is an integral component of breast-conserving therapy that reduces the local recurrence of breast cancer. Because an optimal fractionation schedule (radiation dose given in a specified number of fractions or treatment sessions over a defined time) for breast irradiation has not been uniformly accepted, we examined whether a 22-day fractionation schedule was as effective as the more traditional 35-day schedule in reducing recurrence. Women with invasive breast cancer who were treated by lumpectomy and had pathologically clear resection margins and negative axillary lymph nodes were randomly assigned to receive whole breast irradiation of 42.5 Gy in 16 fractions over 22 days (short arm) or whole breast irradiation of 50 Gy in 25 fractions over 35 days (long arm). The primary outcome was local recurrence of invasive breast cancer in the treated breast. Secondary outcomes included cosmetic outcome, assessed with the European Organisation for Research and Treatment of Cancer (EORTC) Cosmetic Rating System. All statistical tests were two-sided. From April 1993 through September 1996, 1234 women were randomly assigned to treatment, 622 to the short arm and 612 to the long arm. Median follow-up was 69 months. Five-year local recurrence-free survival was 97.2% in the short arm and 96.8% in the long arm (absolute difference = 0.4%, 95% confidence interval [CI] = -1.5% to 2.4%). No difference in disease-free or overall survival rates was detected between study arms. The percentage of patients with an excellent or good global cosmetic outcome at 3 years was 76.8% in the short arm and 77.0% in the long arm; the corresponding data at 5 years were 76.8% and 77.4%, respectively (absolute difference = -0.6%, 95% CI = -6.5% to 5.5%). The more convenient 22-day fractionation schedule appears to be an acceptable alternative to the 35-day schedule.

A body image scale for use with cancer patients.

P Hopwood,  Jamie I. Fletcher,  Sameeh Ghazal … (2000)
Body image is an important endpoint in quality of life evaluation since cancer treatment may result in major changes to patients' appearance from disfiguring surgery, late effects of radiotherapy or adverse effects of systemic treatment. A need was identified to develop a short body image scale (BIS) for use in clinical trials. A 10-item scale was constructed in collaboration with the European Organization for Research and Treatment of Cancer (EORTC) Quality of Life Study Group and tested in a heterogeneous sample of 276 British cancer patients. Following revisions, the scale underwent psychometric testing in 682 patients with breast cancer, using datasets from seven UK treatment trials/clinical studies. The scale showed high reliability (Cronbach's alpha 0.93) and good clinical validity based on response prevalence, discriminant validity (P 50% variance. These results support the clinical validity of the BIS as a brief questionnaire for assessing body image changes in patients with cancer, suitable for use in clinical trials.

Trialists listed at end of paper