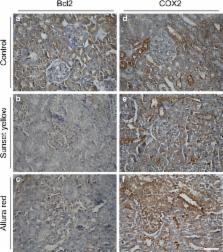 Studies on the adverse health effects caused by azo dyes are insufficient and quite contradictory. This work aims to investigate the possible toxic effect of two types of widely used food additives, Sunset Yellow and Allura Red, by assessing the physiological, histopathological and ultrastructural changes in the liver and kidney. Also, we investigated the genotoxic effect of both dyes on white blood cells. Thirty adult male albino rats were divided into three groups of 10 animals each: control (received water), Sunset Yellow-treated (2.5 mg/kg body weight) and Allura Red-treated (seven mg/kg body weight). The doses were orally applied for 4 weeks. Our results indicated an increase in the biochemical markers of hepatic and renal function (Aspartate aminotransferase, alanine aminotransferase, urea, uric acid and creatinine) in animals administered with the azo dyes. We also observed a noticeable increase in MDA and a marked decrease in total antioxidant levels in azo dye-treated animals compared to controls. Conversely, both dyes adversely affected the liver and kidney of albino rats and altered their histological and fine structure, with downregulation of Bcl2 and upregulation of COX2 expression. Our comet assay results showed a significant elevation in the fold change of tail moment in response to application of Sunset Yellow but not Allura Red. Collectively, we show that Sunset Yellow and Allura Red cause histopathological and physiological aberrations in the liver and kidney of male Wistar albino rats. Moreover, Sunset Yellow but not Allura Red induces a potential genotoxic effect.

Stanley Korsmeyer,  Z Oltvai,  C Milliman … (1993)
Bcl-2 protein is able to repress a number of apoptotic death programs. To investigate the mechanism of Bcl-2's effect, we examined whether Bcl-2 interacted with other proteins. We identified an associated 21 kd protein partner, Bax, that has extensive amino acid homology with Bcl-2, focused within highly conserved domains I and II. Bax is encoded by six exons and demonstrates a complex pattern of alternative RNA splicing that predicts a 21 kd membrane (alpha) and two forms of cytosolic protein (beta and gamma). Bax homodimerizes and forms heterodimers with Bcl-2 in vivo. Overexpressed Bax accelerates apoptotic death induced by cytokine deprivation in an IL-3-dependent cell line. Overexpressed Bax also counters the death repressor activity of Bcl-2. These data suggest a model in which the ratio of Bcl-2 to Bax determines survival or death following an apoptotic stimulus.

Inducible cyclooxygenase may have anti-inflammatory properties.

Steven M. Paul,  D Gilroy,  Cameron Willis … (1999)
Cyclooxygenase (COX) has two isoforms. Generally, COX 1 is constitutively expressed in most tissues, where it maintains physiological processes; inducible COX 2 is considered a pro-inflammatory enzyme and a chief target for the treatment of inflammatory diseases. Here we present evidence that COX 2 may have anti-inflammatory properties. In carrageenin-induced pleurisy in rats, the predominant cells at 2 hours are polymorphonuclear leucocytes, whereas mononuclear cells dominate from 24 hours until resolution at 48 hours. In this model, COX 2 protein expression peaked initially at 2 hours, associated with maximal prostaglandin E2 synthesis. However, at 48 hours there was a second increase in COX 2 expression, 350% greater than that at 2 hours. Paradoxically, this coincided with inflammatory resolution and was associated with minimal prostaglandin E2 synthesis. In contrast, levels of prostaglandin D2, and 15deoxy delta(12-14)prostaglandin J2 were high at 2 hours, decreased as inflammation increased, but were increased again at 48 hours. The selective COX 2 inhibitor NS-398 and the dual COX 1/COX 2 inhibitor indomethacin inhibited inflammation at 2 hours but significantly exacerbated inflammation at 48 hours. This exacerbation was associated with reduced exudate prostaglandin D2 and 15deoxy delta(12-14)prostaglandin J2 concentrations, and was reversed by replacement of these prostaglandins. Thus, COX 2 may be pro-inflammatory during the early phase of a carrageenin-induced pleurisy, dominated by polymorphonuclear leucocytes, but may aid resolution at the later, mononuclear cell-dominated phase by generating an alternative set of anti-inflammatory prostaglandins.