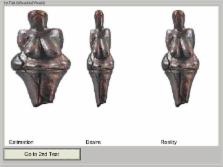 The development and psychometric characteristics of the Somatoform Dissociation Questionnaire (SDQ-20).

Ellert R. S. Nijenhuis,  Eli O. van der Sluis,  Ransome van der Hoeven … (1996)
According to 19th century French psychiatry and contemporary clinical observations, dissociation pertains to both psychological and somatoform components of experience, reactions, and functions. Because such an instrument was lacking, we aimed to develop a self-reporting questionnaire measuring what we propose to call somatoform dissociation. Patients with dissociate disorder and with other DSM-IV psychiatric diagnoses completed a list of 75 items that, according to clinical experience and expert judgment, could reflect instances of somatoform dissociation. Separate logistic analyses and determination of discriminant indices per item revealed 20 items that best discriminated between those with and without dissociative disorders. Mokken analysis showed that these items are strongly scalable on a dimensional latent scale interpreted to measure somatoform dissociation. Reliability of the scale was high. Construct validity was supported by high intercorrelations with the Dissociation Questionnaire, which measures psychological dissociation, and higher scores of patients with dissociative identity disorder compared with patients with dissociative disorders not otherwise specified. In conclusion, the Somatoform Dissociation Questionnaire (SDQ-20) is a scale of good psychometric quality, which measures somatoform dissociation. The symptoms pertain to negative and positive dissociative phenomena, which were well known in 19th century French psychiatry as the mental stigmata and mental accidents of hysteria.

The amygdala between sensation and affect: a role in pain

Pierre Veinante,  Ipek Yalcin,  Michel Barrot (2013)
The amygdala is a structure of the temporal lobe thought to be involved in assigning emotional significance to environmental information and triggering adapted physiological, behavioral and affective responses. A large body of literature in animals and human implicates the amygdala in fear. Pain having a strong affective and emotional dimension, the amygdala, especially its central nucleus (CeA), has also emerged in the last twenty years as key element of the pain matrix. The CeA receives multiple nociceptive information from the brainstem, as well as highly processed polymodal information from the thalamus and the cerebral cortex. It also possesses the connections that allow influencing most of the descending pain control systems as well as higher centers involved in emotional, affective and cognitive functions. Preclinical studies indicate that the integration of nociceptive inputs in the CeA only marginally contributes to sensory-discriminative components of pain, but rather contributes to associated behavior and affective responses. The CeA doesn’t have a major influence on responses to acute nociception in basal condition, but it induces hypoalgesia during aversive situation, such as stress or fear. On the contrary, during persistent pain states (inflammatory, visceral, neuropathic), a long-lasting functional plasticity of CeA activity contributes to an enhancement of the pain experience, including hyperalgesia, aversive behavioral reactions and affective anxiety-like states.

The relationship between physical activity and self-image and problem behaviour among adolescents.

B. Kirkcaldy,  R J Shephard,  R Siefen (2002)
Although there are a vast array of studies which have demonstrated the psychological and physical health benefits of regular aerobic exercise for adults, few studies have focussed on children and adolescents. The current study examined associations between the extent of participation in endurance sport, and self-report data on self-image, physical and psychological health and overall lifestyle in a large representative sample of German high-school students. Almost 1000 German adolescents (aged 14-18 years) were administered a comprehensive series of questionnaires aimed at assessing anxiety-depression, trait addiction, smoking and drinking behaviour, physical ill-health reports, and self-perception of self-image, parental acceptance and educational attainment. Regular practice of endurance exercise was related to a more favourable self-image. There was a strong association between participation in sports and the type of personality that tends to be resistant to drug and alcohol addiction. Physical exercise was further significantly related to scores for physical and psychological well-being. Adolescents who engaged regularly in physical activity were characterised by lower anxiety-depression scores, and displayed much less social behavioural inhibition than their less active counterparts. It is likely that discussion of recreational or exercise involvement may provide a useful point of entry for facilitating dialogue among adolescents about concerns relating to body image and self-esteem. In terms of psychotherapeutic applications, physical activity has many additional rewards for adolescents. It is probable that by promoting physical fitness, increased physical performance, lessening body mass and promoting a more favourable body shape and structure, exercise will provide more positive social feedback and recognition from peer groups, and this will subsequently lead to improvement in an individual's self-image.