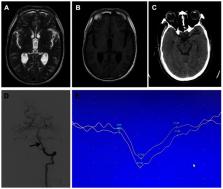 Based on the presence of post-operative cortical visual impairment, 4,528 patients who received cerebral angiography were split into two groups. The relevant risk factors were compared and analyzed between the groups.

In the patient cohort, 11 cases exhibited post-operative cortical visual impairment (0.24%). In particular, seven patients presented with blurred vision and four presented with binocular blindness. Visual sensation of these patients recovered after the treatment. Our univariate analysis revealed that differences in age, weight, sex ratios, proportions of patients with hypertension, diabetes and hyperlipemia, and operation time were not statistically significant between the two groups ( P>0.05). The multivariate analysis indicated that the dosage of contrast medium was the independent risk factor for post-operative cortical visual impairment.

Cathy Alessi,  Morgan Gilman,  Charles Beck … (1987)
We examined 15 patients with cortical blindness, reviewed the records of 10 others, and compared these 25 patients to those in previous studies of cortical blindness. Although cerebrovascular disease was the most common cause in our series, surgery, particularly cardiac surgery, and cerebral angiography were also major causes. Only 3 patients denied their blindness, although 4 others were unaware of their visual loss. Electroencephalograms (EEGs) were performed during the period of blindness in 20 patients and all recordings were abnormal, with absent alpha rhythm. Visual evoked potentials recorded during blindness were abnormal in 15 of 19 patients, but did not correlate with the severity of visual loss or with outcome. Bioccipital lucencies were found in computed tomographic (CT) scans of 14 patients; none of the 14 regained good vision. Recovery of vision was poor in all 8 patients who had a spontaneous stroke, but fair or good in 11 of the other 17 patients. Prognosis was best in patients under the age of 40 years, in those without a history of hypertension or diabetes mellitus, and in those without associated cognitive, language, or memory impairments. We conclude that the prognosis in cortical blindness is poor when caused by stroke; EEGs are more useful than visual evoked potentials for diagnosis; and bioccipital abnormalities shown on CT scan are associated with a poor prognosis.

Krystel R. Huxlin,  Anasuya Das (2010)
Cortical blindness is a chronic loss of vision following damage to the primary visual cortex (V1) or its postchiasmal afferents. Such damage is followed by a brief period of spontaneous plasticity that rarely lasts beyond 6 months. Following this initial phase, the visual deficit is thought to be stable, intractable, and permanent. Cortically blind subjects demonstrate spontaneous oculomotor adaptations to their deficits that can be further improved by saccadic localization training. However, saccadic training does not improve visual sensitivity in the blind field. In contrast, recent studies by a number of independent groups suggest that localized, repetitive perceptual training can improve visual sensitivity in the blind field, although mechanisms underlying the observed recovery remain unclear. This review discusses the current literature on rehabilitative strategies used for cortical blindness with emphasis on the use of perceptual training methods. The putative mechanisms that underlie the resulting, training-induced visual improvements are then outlined, along with the special challenges posed to their elucidation by the great variability in the extent and sometimes nature of the V1 damage sustained in different individuals.

Relearning to See in Cortical Blindness.

Michael D Melnick,  Duje Tadin,  Krystel R. Huxlin (2016)
The incidence of cortically induced blindness is increasing as our population ages. The major cause of cortically induced blindness is stroke affecting the primary visual cortex. While the impact of this form of vision loss is devastating to quality of life, the development of principled, effective rehabilitation strategies for this condition lags far behind those used to treat motor stroke victims. Here we summarize recent developments in the still emerging field of visual restitution therapy, and compare the relative effectiveness of different approaches. We also draw insights into the properties of recovered vision, its limitations and likely neural substrates. We hope that these insights will guide future research and bring us closer to the goal of providing much-needed rehabilitation solutions for this patient population.