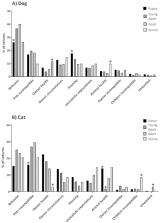 A considerable number of adopted animals are returned to animal shelters post-adoption which can be stressful for both the animal and the owner. In this retrospective analysis of 23,932 animal records from a US shelter, we identified animal characteristics associated with the likelihood of return, key return reasons, and outcomes post-return for dogs and cats. Binary logistic regression models were used to describe the likelihood of return, return reason and outcome based on intake age, intake type, sex, breed and return frequency. Behavioral issues and incompatibility with existing pets were the most common return reasons. Age and breed group (dogs only) predicted the likelihood of return, return reason and post-adoption return outcome. Adult dogs had the greatest odds of post-adoption return (OR 3.40, 95% CI 2.88–4.01) and post-return euthanasia (OR 3.94, 95% CI 2.04–7.59). Toy and terrier breeds were 65% and 35% less likely to be returned compared with herding breeds. Pit bull-type breeds were more likely to be returned multiple times ( X 2  = 18.11, p = 0.01) and euthanized post-return (OR 2.60, 95% CI 1.47–4.61). Our findings highlight the importance of animal behavior in the retention of newly adopted animals and provide useful direction for allocation of resources and future adoption counselling and post-adoption support services.

Morten Fagerland (2012)
Background During the last 30 years, the median sample size of research studies published in high-impact medical journals has increased manyfold, while the use of non-parametric tests has increased at the expense of t-tests. This paper explores this paradoxical practice and illustrates its consequences. Methods A simulation study is used to compare the rejection rates of the Wilcoxon-Mann-Whitney (WMW) test and the two-sample t-test for increasing sample size. Samples are drawn from skewed distributions with equal means and medians but with a small difference in spread. A hypothetical case study is used for illustration and motivation. Results The WMW test produces, on average, smaller p-values than the t-test. This discrepancy increases with increasing sample size, skewness, and difference in spread. For heavily skewed data, the proportion of p<0.05 with the WMW test can be greater than 90% if the standard deviations differ by 10% and the number of observations is 1000 in each group. The high rejection rates of the WMW test should be interpreted as the power to detect that the probability that a random sample from one of the distributions is less than a random sample from the other distribution is greater than 50%. Conclusions Non-parametric tests are most useful for small studies. Using non-parametric tests in large studies may provide answers to the wrong question, thus confusing readers. For studies with a large sample size, t-tests and their corresponding confidence intervals can and should be used even for heavily skewed data.

Why Did You Choose This Pet?: Adopters and Pet Selection Preferences in Five Animal Shelters in the United States

Emily Weiss,  Katherine Miller,  Heather Mohan-Gibbons … (2012)
Simple Summary This study examined reasons why adopters chose their pet in an animal shelter, what behaviors were first exhibited by the pet to the adopter, what information was important during their selection process, and the relative importance of seeing the animals’ behavior in various contexts. Abstract Responses from an adopter survey (n = 1,491) determined reasons for pet selection, type of information received by the adopter, and the context in which the animal’s behavior was observed. Appearance of the animal, social behavior with adopter, and personality were the top reasons for adoption across species and age groups. Most adopters stated that information about the animal from a staff member or volunteer was more important than information on cage cards, and health and behavior information was particularly important. Adopters found greater importance in interacting with the animal rather than viewing it in its kennel. The results of this study can be used by shelters to create better adoption matches, prioritize shelter resources and staff training, and potentially increase adoptions. Additionally, some simple training techniques are suggested to facilitate adopter-friendly behaviors from sheltered dogs and cats.