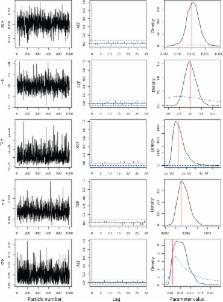 The transition density of a stochastic, logistic population growth model with multiplicative intrinsic noise is analytically intractable. Inferring model parameter values by fitting such stochastic differential equation (SDE) models to data therefore requires relatively slow numerical simulation. Where such simulation is prohibitively slow, an alternative is to use model approximations which do have an analytically tractable transition density, enabling fast inference. We introduce two such approximations, with either multiplicative or additive intrinsic noise, each derived from the linear noise approximation (LNA) of a logistic growth SDE. After Bayesian inference we find that our fast LNA models, using Kalman filter recursion for computation of marginal likelihoods, give similar posterior distributions to slow, arbitrarily exact models. We also demonstrate that simulations from our LNA models better describe the characteristics of the stochastic logistic growth models than a related approach. Finally, we demonstrate that our LNA model with additive intrinsic noise and measurement error best describes an example set of longitudinal observations of microbial population size taken from a typical, genome-wide screening experiment.

Adam C. Wilkinson (2009)
Two related developments are currently changing traditional approaches to computational systems biology modelling. First, stochastic models are being used increasingly in preference to deterministic models to describe biochemical network dynamics at the single-cell level. Second, sophisticated statistical methods and algorithms are being used to fit both deterministic and stochastic models to time course and other experimental data. Both frameworks are needed to adequately describe observed noise, variability and heterogeneity of biological systems over a range of scales of biological organization.

D. Wilkinson,  A Golightly (2005)
This article is concerned with the Bayesian estimation of stochastic rate constants in the context of dynamic models of intracellular processes. The underlying discrete stochastic kinetic model is replaced by a diffusion approximation (or stochastic differential equation approach) where a white noise term models stochastic behavior and the model is identified using equispaced time course data. The estimation framework involves the introduction of m- 1 latent data points between every pair of observations. MCMC methods are then used to sample the posterior distribution of the latent process and the model parameters. The methodology is applied to the estimation of parameters in a prokaryotic autoregulatory gene network.