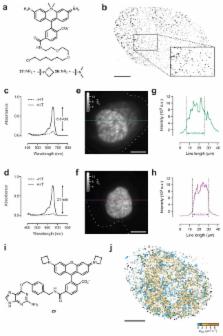 Specific labeling of biomolecules with bright fluorophores is the keystone of fluorescence microscopy. Genetically encoded self-labeling tag proteins can be coupled to synthetic dyes inside living cells, resulting in brighter reporters than fluorescent proteins. Intracellular labeling using these techniques requires cell-permeable fluorescent ligands, however, limiting utility to a small number of classic fluorophores. Here, we describe a simple structural modification that improves the brightness and photostability of dyes while preserving spectral properties and cell permeability. Inspired by molecular modeling, we replaced the N, N-dimethylamino substituents in tetramethylrhodamine with four-membered azetidine rings. This addition of two carbon atoms doubles the quantum efficiency and improves the photon yield of the dye in applications ranging from in vitro single-molecule measurements to super-resolution imaging. The novel substitution is generalizable, yielding a palette of chemical dyes with improved quantum efficiencies that spans the UV and visible range.

Optimization of a GCaMP calcium indicator for neural activity imaging.

Vivek Jayaraman,  Nicole Carreras Calderón,  John Macklin … (2012)
Genetically encoded calcium indicators (GECIs) are powerful tools for systems neuroscience. Recent efforts in protein engineering have significantly increased the performance of GECIs. The state-of-the art single-wavelength GECI, GCaMP3, has been deployed in a number of model organisms and can reliably detect three or more action potentials in short bursts in several systems in vivo. Through protein structure determination, targeted mutagenesis, high-throughput screening, and a battery of in vitro assays, we have increased the dynamic range of GCaMP3 by severalfold, creating a family of "GCaMP5" sensors. We tested GCaMP5s in several systems: cultured neurons and astrocytes, mouse retina, and in vivo in Caenorhabditis chemosensory neurons, Drosophila larval neuromuscular junction and adult antennal lobe, zebrafish retina and tectum, and mouse visual cortex. Signal-to-noise ratio was improved by at least 2- to 3-fold. In the visual cortex, two GCaMP5 variants detected twice as many visual stimulus-responsive cells as GCaMP3. By combining in vivo imaging with electrophysiology we show that GCaMP5 fluorescence provides a more reliable measure of neuronal activity than its predecessor GCaMP3. GCaMP5 allows more sensitive detection of neural activity in vivo and may find widespread applications for cellular imaging in general.

A general method for the covalent labeling of fusion proteins with small molecules in vivo.

Antje Keppler,  Susanne Gendreizig,  Thomas Gronemeyer … (2003)
Characterizing the movement, interactions, and chemical microenvironment of a protein inside the living cell is crucial to a detailed understanding of its function. Most strategies aimed at realizing this objective are based on genetically fusing the protein of interest to a reporter protein that monitors changes in the environment of the coupled protein. Examples include fusions with fluorescent proteins, the yeast two-hybrid system, and split ubiquitin. However, these techniques have various limitations, and considerable effort is being devoted to specific labeling of proteins in vivo with small synthetic molecules capable of probing and modulating their function. These approaches are currently based on the noncovalent binding of a small molecule to a protein, the formation of stable complexes between biarsenical compounds and peptides containing cysteines, or the use of biotin acceptor domains. Here we describe a general method for the covalent labeling of fusion proteins in vivo that complements existing methods for noncovalent labeling of proteins and that may open up new ways of studying proteins in living cells.

Fluorogenic probes for live-cell imaging of the cytoskeleton.

Gražvydas Lukinavičius,  Luc Reymond,  Elisa D'Este … (2014)
We introduce far-red, fluorogenic probes that combine minimal cytotoxicity with excellent brightness and photostability for fluorescence imaging of actin and tubulin in living cells. Applied in stimulated emission depletion (STED) microscopy, they reveal the ninefold symmetry of the centrosome and the spatial organization of actin in the axon of cultured rat neurons with a resolution unprecedented for imaging cytoskeletal structures in living cells.