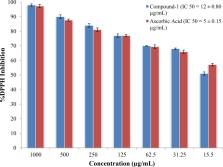 Cancer is one of the chronic health conditions worldwide. Various therapeutically active compounds from medicinal plants were the current focus of this research in order to uncover a treatment regimen for cancer. Anchusa arvensis (A. anchusa) (L.) M.Bieb. contains many biologically active compounds.

The structure of the compound was elucidated based on IR, EI, and NMR spectroscopy technique. It exhibited a considerable cytotoxic effect against HepG-2 cell lines with IC 50 value of 6.50 ± 0.70 µg/mL in comparison to positive control (doxorubicin) which showed IC 50 value of 1.3±0.21 µg/mL. The compound did not show a cytotoxic effect against normal epithelial cell line (Vero). The compound also exhibited significant DPHH scavenging ability with IC 50 value of 12 ± 0.80 µg/mL, whereas ascorbic acid, used as positive control, demonstrated activity with IC 50 = 05 ± 0.15 µg/mL. Similarly, it showed ABTS radical scavenging ability (IC 50 = 130 ± 0.20 µg/mL) compared with the value obtained for ascorbic acid (06 ± 0.85 µg/mL). In docking studies using MOE-2016 tool, it was observed that compound-1 was highly bound to tyrosine kinase by having two hydrogen bonds at the hinge region. This good bonding network by the compound might be one of the reasons for showing significant activity against this enzyme.

Our findings led to the isolation of a new compound from A. anchusa which has significant cytotoxic activity against HepG-2 cell lines with marked antioxidant potential.

Amit Arora,  Eric M Scholar (2005)
Cancer chemotherapy has been one of the major medical advances in the last few decades. However, the drugs used for this therapy have a narrow therapeutic index, and often the responses produced are only just palliative as well as unpredictable. In contrast, targeted therapy that has been introduced in recent years is directed against cancer-specific molecules and signaling pathways and thus has more limited nonspecific toxicities. Tyrosine kinases are an especially important target because they play an important role in the modulation of growth factor signaling. This review focuses on small molecule inhibitors of tyrosine kinase. They compete with the ATP binding site of the catalytic domain of several oncogenic tyrosine kinases. They are orally active, small molecules that have a favorable safety profile and can be easily combined with other forms of chemotherapy or radiation therapy. Several tyrosine kinase inhibitors (TKIs) have been found to have effective antitumor activity and have been approved or are in clinical trials. The inhibitors discussed in this manuscript are imatinib mesylate (STI571; Gleevec), gefitinib (Iressa), erlotinib (OSI-1774; Tarceva), lapatinib (GW-572016), canertinib (CI-1033), semaxinib (SU5416), vatalanib (PTK787/ZK222584), sorafenib (BAY 43-9006), sutent (SU11248), and leflunomide (SU101). TKIs are thus an important new class of targeted therapy that interfere with specific cell signaling pathways and thus allow target-specific therapy for selected malignancies. The pharmacological properties and anticancer activities of these inhibitors are discussed in this review. Use of these targeted therapies is not without limitations such as the development of resistance and the lack of tumor response in the general population. The availability of newer inhibitors and improved patient selection will help overcome these problems in the future.

L. Di Ciaccio,  Paolo Politi,  N. De Groot … (2001)
A new cyclohexenone (1) and a new caffeoyl ester derivative (2), together with the known compounds (-)-isolariciresinol 3-alpha-O-beta-D-glucopyranoside (3), (+)-1-hydroxypinoresinol 1-O-beta-D-glucopyranoside (4), isoacteoside (5), luteolin 4'-O-beta-D-glucopyranoside (6), and indole-3-carboxylic acid (7), were isolated from the leaves of Bauhinia tarapotensis. The structures of these new compounds were determined by spectroscopic data analysis. The antioxidant activities of 1-7 were determined by measuring their free radical scavenging effects, using the 1,1-diphenyl-2-dipicrylhydrazyl free radical (DPPH) and Trolox equivalent antioxidant activity (TEAC) methods, and the coupled oxidation of beta-carotene and linoleic acid. Compounds 3-5 showed good activities in the DPPH and TEAC tests, while compounds 1 and 2 were active in the coupled oxidation of beta-carotene and linoleic acid bioassay.