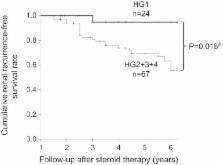 In patients with IgA nephropathy (IgAN), recurrence after steroid pulse therapy is associated with reduced renal survival. However, the predictors of recurrence have not yet been clarified.

All patients who received 6-month steroid pulse therapy from 2004 to 2010 in our four affiliated hospitals and achieved a reduction of proteinuria to <0.4 g/day 1 year after treatment were retrospectively evaluated. The primary outcome was proteinuria ≥1.0 g/day during follow-up or additional antiproteinuric therapy. Two histological classifications were evaluated, the Oxford Classification with a split system and Japanese histological grades (HGs) with a lumped system.

During a median follow-up of 3.4 years, 27 (26.7 %) of the 101 patients showed recurrence. Multivariate analysis showed that HG was the only significant predictor of recurrence, with HG 2+3+4 vs HG 1 having a hazard ratio of 7.38 (95 % confidence interval 1.52–133). Furthermore, in patients with mesangial hypercellularity according to the Oxford Classification, cumulative rate of recurrence-free survival was greater in patients with steroid therapy plus tonsillectomy compared with those who received steroid therapy alone (Log-rank test, P = 0.022). However, this association was not observed in patients without mesangial hypercellularity.

Daniel C. Cattran,  ,  Stéphan Troyanov … (2007)
Proteinuria has been shown to be an adverse prognostic factor in IgA nephropathy. The benefit of achieving a partial remission of proteinuria, however, has not been well described. We studied 542 patients with biopsy-proven primary IgA nephropathy in the Toronto Glomerulonephritis Registry and found that glomerular filtration rate (GFR) declined at -0.38 +/- 0.61 ml/min per 1.73 m2/mo overall, with 30% of subjects reaching end-stage renal disease. Multivariate analysis revealed that proteinuria during follow-up was the most important predictor of the rate of GFR decline. Among the 171 patients with 3 g/d (n = 121) lost renal function 25-fold faster than those with or =3 g/d who achieved a partial remission (<1 g/d) had a similar course to patients who had < or =1 g/d throughout, and fared far better than patients who never achieved remission. These results underscore the relationship between proteinuria and prognosis in IgA nephropathy and establish the importance of remission.

The commonest glomerulonephritis in the world: IgA nephropathy.

Long-term renal survival and related risk factors in patients with IgA nephropathy: results from a cohort of 1155 cases in a Chinese adult population.

Shaoshan Liang,  Kangping Deng,  Zhihong Liu … (2012)
We sought to identify the long-term renal survival rate and related risk factors of progression to renal failure in Chinese adult patients with IgA nephropathy (IgAN) and to quantify the effects of proteinuria during the follow-up on outcome in patients with IgAN. Patients with biopsy-proven primary IgAN in the Nanjing Glomerulonephritis Registry were studied. Renal survival and the relationships between clinical parameters and renal outcomes were assessed. One thousand one hundred and fifty-five patients were enrolled in this study. The 10-, 15- and 20-year cumulative renal survival rates, calculated by Kaplan-Meier method, were 83, 74 and 64%, respectively. At the time of biopsy, proteinuria>1.0 g/day [hazard ratio (HR) 3.2, P 1.0 g/day were associated with a 9.4-fold risk than patients with TA-P<1.0 g/day (P<0.001) and 46.5-fold risk than those with TA-P<0.5 g/day (P<0.001). Moreover, patients who achieved TA-P<0.5 g/day benefit much more than those with TA-P between 0.5 and 1.0 g/day (HR 13.1, P<0.001). Thirty-six percent of Chinese adult patients with IgAN progress to end stage renal disease within 20 years. Five clinical features-higher proteinuria, hypertension, impaired renal function, hypoproteinemia and hyperuricemia-are independent predictors of an unfavorable renal outcome. The basic goal of anti-proteinuric therapy for Chinese patients is to lower proteinuria<1.0 g/day and the optimal goal is to lower proteinuria to <0.5 g/day.