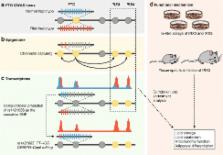 High-throughput technologies have revolutionized medical research. The advent of genotyping arrays enabled large-scale genome-wide association studies and methods for examining global transcript levels, which gave rise to the field of “integrative genetics”. Other omics technologies, such as proteomics and metabolomics, are now often incorporated into the everyday methodology of biological researchers. In this review, we provide an overview of such omics technologies and focus on methods for their integration across multiple omics layers. As compared to studies of a single omics type, multi-omics offers the opportunity to understand the flow of information that underlies disease.

E Ravasz,  A L Somera,  D. A. Mongru … (2002)
Spatially or chemically isolated functional modules composed of several cellular components and carrying discrete functions are considered fundamental building blocks of cellular organization, but their presence in highly integrated biochemical networks lacks quantitative support. Here we show that the metabolic networks of 43 distinct organisms are organized into many small, highly connected topologic modules that combine in a hierarchical manner into larger, less cohesive units, their number and degree of clustering following a power law. Within Escherichia coli the uncovered hierarchical modularity closely overlaps with known metabolic functions. The identified network architecture may be generic to system-level cellular organization.

Innovation: Metabolomics: the apogee of the omics trilogy.

Gary Siuzdak,  Oscar Yanes,  Gary J Patti (2012)
Metabolites, the chemical entities that are transformed during metabolism, provide a functional readout of cellular biochemistry. With emerging technologies in mass spectrometry, thousands of metabolites can now be quantitatively measured from minimal amounts of biological material, which has thereby enabled systems-level analyses. By performing global metabolite profiling, also known as untargeted metabolomics, new discoveries linking cellular pathways to biological mechanism are being revealed and are shaping our understanding of cell biology, physiology and medicine.