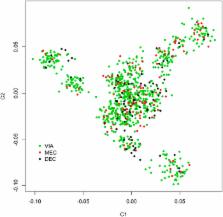 Control of porcine reproductive and respiratory syndrome (PRRS) is economically important for the swine industry worldwide. As current PRRS vaccines do not completely protect against heterologous challenge, alternative means of control, including enhanced genetic resilience, are needed. For reproductive PRRS, the genetic basis of fetal response to PRRS virus (PRRSV) infection is poorly understood. Genome-wide association studies (GWAS) were done here using data from 928 fetuses from pregnant gilts experimentally challenged with type 2 PRRSV. Fetuses were assessed for viral load in thymus (VLT), viral load in endometrium (VLE), fetal death (FD) and fetal viability (FV), and genotyped at a medium density. Collectively, 21 candidate genomic regions were found associated with these traits, seven of which overlap with previously reported QTLs for pig health and reproduction. A comparison with ongoing and related transcriptomic analyses of fetal response to PRRSV infection found differentially expressed genes within 18 candidate regions. Some of these genes have immune system functions, and have been reported to contribute to host response to PRRSV infection. The results provide new evidence about the genetic basis of fetal response to PRRSV challenge, and may ultimately lead to alternative control strategies to reduce the impact of reproductive PRRS.

Second-generation PLINK: rising to the challenge of larger and richer datasets

,  ,   … (2014)
PLINK 1 is a widely used open-source C/C++ toolset for genome-wide association studies (GWAS) and research in population genetics. However, the steady accumulation of data from imputation and whole-genome sequencing studies has exposed a strong need for even faster and more scalable implementations of key functions. In addition, GWAS and population-genetic data now frequently contain probabilistic calls, phase information, and/or multiallelic variants, none of which can be represented by PLINK 1's primary data format. To address these issues, we are developing a second-generation codebase for PLINK. The first major release from this codebase, PLINK 1.9, introduces extensive use of bit-level parallelism, O(sqrt(n))-time/constant-space Hardy-Weinberg equilibrium and Fisher's exact tests, and many other algorithmic improvements. In combination, these changes accelerate most operations by 1-4 orders of magnitude, and allow the program to handle datasets too large to fit in RAM. This will be followed by PLINK 2.0, which will introduce (a) a new data format capable of efficiently representing probabilities, phase, and multiallelic variants, and (b) extensions of many functions to account for the new types of information. The second-generation versions of PLINK will offer dramatic improvements in performance and compatibility. For the first time, users without access to high-end computing resources can perform several essential analyses of the feature-rich and very large genetic datasets coming into use.

Mapping identifiers for the integration of genomic datasets with the R/Bioconductor package biomaRt.

Paul Spellman,  Steffen Durinck,  Wolfgang Huber … (2008)
Genomic experiments produce multiple views of biological systems, among them are DNA sequence and copy number variation, and mRNA and protein abundance. Understanding these systems needs integrated bioinformatic analysis. Public databases such as Ensembl provide relationships and mappings between the relevant sets of probe and target molecules. However, the relationships can be biologically complex and the content of the databases is dynamic. We demonstrate how to use the computational environment R to integrate and jointly analyze experimental datasets, employing BioMart web services to provide the molecule mappings. We also discuss typical problems that are encountered in making gene-to-transcript-to-protein mappings. The approach provides a flexible, programmable and reproducible basis for state-of-the-art bioinformatic data integration.