Mitochondria in migraine pathophysiology – does epigenetics play a role? 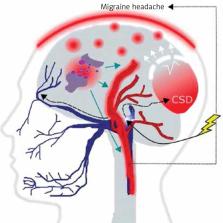 The approximately three times higher rate of migraine prevalence in women than men may result from the mitochondrial transmission of this disease. Studies with imaging techniques suggest disturbances in mitochondrial metabolism in specific regions of the brain in migraine patients. Migraine shares some clinical features with several mitochondrial diseases and many other disorders include migraine headaches. Epigenetic regulation of mitochondrial DNA (mtDNA) is a matter of debate and there are some conflicting results, especially on mtDNA methylation. Micro RNAs (miRNAs) and long-noncoding RNA (lncRNAs) have been detected in mitochondria. The regulation of the miRNA-lncRNA axis can be important for mitochondrial physiology and its impairment can result in a disease phenotype. Further studies on the role of mitochondrial epigenetic modifications in migraine are needed, but they require new methods and approaches.

Da Jia,  Keqin Kathy Li,  Xiaodong Cheng … (2007)
Mammals use DNA methylation for the heritable silencing of retrotransposons and imprinted genes and for the inactivation of the X chromosome in females. The establishment of patterns of DNA methylation during gametogenesis depends in part on DNMT3L, an enzymatically inactive regulatory factor that is related in sequence to the DNA methyltransferases DNMT3A and DNMT3B. The main proteins that interact in vivo with the product of an epitope-tagged allele of the endogenous Dnmt3L gene were identified by mass spectrometry as DNMT3A2, DNMT3B and the four core histones. Peptide interaction assays showed that DNMT3L specifically interacts with the extreme amino terminus of histone H3; this interaction was strongly inhibited by methylation at lysine 4 of histone H3 but was insensitive to modifications at other positions. Crystallographic studies of human DNMT3L showed that the protein has a carboxy-terminal methyltransferase-like domain and an N-terminal cysteine-rich domain. Cocrystallization of DNMT3L with the tail of histone H3 revealed that the tail bound to the cysteine-rich domain of DNMT3L, and substitution of key residues in the binding site eliminated the H3 tail-DNMT3L interaction. These data indicate that DNMT3L recognizes histone H3 tails that are unmethylated at lysine 4 and induces de novo DNA methylation by recruitment or activation of DNMT3A2.

CGRP and its receptors provide new insights into migraine pathophysiology.

P Goadsby,  Iris Ho,  Hector Ho … (2010)
Over the past 300 years, the migraine field has been dominated by two main theories-the vascular theory and the central neuronal theory. The success of vasoconstrictors such as ergotamine and the triptans in treating acute migraine bolstered the vascular theory, but evidence is now emerging that vasodilatation is neither necessary nor sufficient to induce a migraine attack. Attention is now turning to the core migraine circuits in the brain, which include the trigeminal ganglia, trigeminal nucleus, medullary modulatory regions, pons, periaqueductal gray matter, hypothalamus and thalamus. Migraine triggers are likely to reflect a disturbance in overall balance of the circuits involved in the modulation of sensory activity, particularly those with relevance to the head. In this Review, we consider the evidence pointing towards a neuronal mechanism in migraine development, highlighting the role of calcitonin gene-related peptide (CGRP), which is found in small to medium-sized neurons in the trigeminal ganglion. CGRP is released during migraine attacks and can trigger migraine in patients, and CGRP receptor antagonists can abort migraine. We also examine whether other drugs, such as triptans, might exert their antimigraine effects via their actions on the neuronal circuit as opposed to the intracranial vasculature.