A novel and universal method for microRNA RT-qPCR data normalization 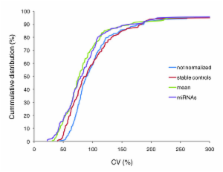 The mean expression value: a new method for accurate and reliable normalization of microRNA expression data from RT-qPCR experiments.

Gene expression analysis of microRNA molecules is becoming increasingly important. In this study we assess the use of the mean expression value of all expressed microRNAs in a given sample as a normalization factor for microRNA real-time quantitative PCR data and compare its performance to the currently adopted approach. We demonstrate that the mean expression value outperforms the current normalization strategy in terms of better reduction of technical variation and more accurate appreciation of biological changes.

Justin Lamb,  Todd R. Golub,  B Ebert … (2005)
Recent work has revealed the existence of a class of small non-coding RNA species, known as microRNAs (miRNAs), which have critical functions across various biological processes. Here we use a new, bead-based flow cytometric miRNA expression profiling method to present a systematic expression analysis of 217 mammalian miRNAs from 334 samples, including multiple human cancers. The miRNA profiles are surprisingly informative, reflecting the developmental lineage and differentiation state of the tumours. We observe a general downregulation of miRNAs in tumours compared with normal tissues. Furthermore, we were able to successfully classify poorly differentiated tumours using miRNA expression profiles, whereas messenger RNA profiles were highly inaccurate when applied to the same samples. These findings highlight the potential of miRNA profiling in cancer diagnosis.