A Case of Hypersensitivity Syndrome to Both Vancomycin and Teicoplanin 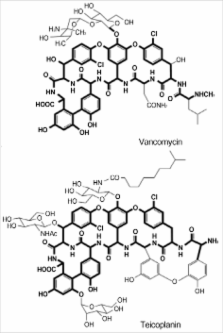 M. Bagot d’Arc,  H. Bocquet,  J-C Roujeau (1996)
Since the first description by Saltzstein in 1959, the denomination of drug-induced pseudolymphoma was used to describe two cutaneous adverse drug reactions with a histological picture mimicking malignant lymphoma. On the basis of clinical presentation, this term includes two different patterns: (1) hypersensitivity syndrome which begins acutely in the first 2 months after the initiation of the drug and associates fever, a severe skin disease with characteristic infiltrated papules and facial edema or an exfoliative dermatitis, lymphadenopathy, hematologic abnormalities (hypereosinophilia, atypical lymphocytes) and organ involvement such as hepatitis, carditis, interstitial nephritis, or interstitial pneumonitis. The cutaneous histological pattern shows a lymphocytic infiltrate, sometimes mimicking a cutaneous lymphoma, and the mortality rate is about 10%. When organ involvement exists, corticosteroids are often prescribed with dramatic improvement. Relapses may occur. (2) drug-induced pseudolymphoma which has a more insidious beginning with nodules and infiltrated plaques appearing several weeks after the beginning of the drug without constitutional symptoms. A pseudolymphoma pattern is seen on cutaneous histological slides. Complete improvement is usual after drug withdrawal, but a delayed lymphoma is possible. To decrease the ambiguity of the denomination of hypersensitivity syndrome, we propose the term of DRESS (Drug Rash with Eosinophilia and Systemic Symptoms).

The drug hypersensitivity syndrome: what is the pathogenesis?

Nicolas Bachot,  Jean Claude Roujeau (2002)
Adverse cutaneous reactions to drugs are frequent, mostly secondary to antibacterials, however, serious adverse cutaneous reactions are infrequent. Stevens-Johnson syndrome (SJS) and toxic epidermal necrolysis (TEN) are a spectrum of the same disease. They are the more severe drug eruptions, with a mortality around 30% for TEN. The confusion between erythema multiforme major and SJS means that erythema multiforme major is the main differential diagnosis. Skin disorders involving desquamation, in particular after pustulosis, are also common differential diagnoses. Mechanical or autoimmune blistering are also potential misdiagnoses of TEN/SJS. Hypersensitivity Syndrome (HSS) or Drug Rash with Eosinophilia and Systemic Symptoms (DRESS) is a severe cutaneous drug reaction with often a long duration of eruption and serious other organ involvement. Exfoliative dermatitis, whether caused by psoriasis, dermatitis or lymphoma, can be thought of as a differential diagnosis of DRESS/HSS. Angio-immunoblastic lymphadenopathy, viral eruption and vasculitis are other differential diagnoses of DRESS/HSS. Prompt recognition of a severe drug reaction and withdrawal of the culprit drug is often the most important therapeutic action. Alternatively, a delay in starting a specific treatment for a disease misdiagnosed as a drug eruption could be deleterious.

HSK and YSC equally contributed to this work.