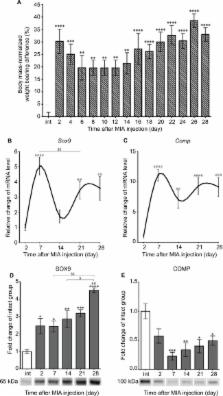 Matrix metalloproteinases (MMPs) are considered important in articular cartilage breakdown during osteoarthritis (OA). Similarly, the endocannabinoid system (ECS) is implicated in joint function and modulation of nociceptive processing. Functional interplay between ECS and MMPs has been recently indicated. Here, we tested if changes in the expression of selected MMPs and major ECS elements temporally correlate with the intensity of OA-related pain. Knee OA was induced in male Wistar rats by intra-articular sodium monoiodoacetate injection. OA-like pain behavior was tested using the dynamic weight bearing. Joint tissue samples at different time points after OA induction were subjected to gene (quantitative polymerase chain reaction) and protein (Western blot) expression analyses. Monoiodoacetate-induced nocifensive responses in rats showed a biphasic progression pattern. The alterations in expression of selected MMPs elegantly corresponded to the two-stage development of OA pain. The most substantial changes in the expression of the ECS system were revealed at a later stage of OA progression. Alterations within ECS are involved in the process of adaptation to persistent painful stimuli. The accumulation of MMPs in osteoarthritic cartilage may have a role in the biphasic progression of OA-related pain. Temporal association of changes in ECS and MMPs expression shows a potential therapeutic approach that utilizes the concept of combining indirect ECS-mediated MMP inhibition and ECS modulation of pain transduction.

Egbert van Nes,  Jill Poole,  L Dahlberg … (1997)
We demonstrate the direct involvement of increased collagenase activity in the cleavage of type II collagen in osteoarthritic human femoral condylar cartilage by developing and using antibodies reactive to carboxy-terminal (COL2-3/4C(short)) and amino-terminal (COL2-1/4N1) neoepitopes generated by cleavage of native human type II collagen by collagenase matrix metalloproteinase (MMP)-1 (collagenase-1), MMP-8 (collagenase-2), and MMP-13 (collagenase-3). A secondary cleavage followed the initial cleavage produced by these recombinant collagenases. This generated neoepitope COL2-1/4N2. There was significantly more COL2-3/4C(short) neoepitope in osteoarthritis (OA) compared to adult nonarthritic cartilages as determined by immunoassay of cartilage extracts. A synthetic preferential inhibitor of MMP-13 significantly reduced the unstimulated release in culture of neoepitope COL2-3/4C(short) from human osteoarthritic cartilage explants. These data suggest that collagenase(s) produced by chondrocytes is (are) involved in the cleavage and denaturation of type II collagen in articular cartilage, that this is increased in OA, and that MMP-13 may play a significant role in this process.

Weight bearing as a measure of disease progression and efficacy of anti-inflammatory compounds in a model of monosodium iodoacetate-induced osteoarthritis.