Metabolomics and systems pharmacology: why and how to model the human metabolic network for drug discovery☆ 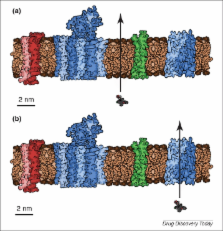 Metabolism represents the ‘sharp end’ of systems biology, because changes in metabolite concentrations are necessarily amplified relative to changes in the transcriptome, proteome and enzyme activities, which can be modulated by drugs. To understand such behaviour, we therefore need (and increasingly have) reliable consensus (community) models of the human metabolic network that include the important transporters. Small molecule ‘drug’ transporters are in fact metabolite transporters, because drugs bear structural similarities to metabolites known from the network reconstructions and from measurements of the metabolome. Recon2 represents the present state-of-the-art human metabolic network reconstruction; it can predict inter alia: (i) the effects of inborn errors of metabolism; (ii) which metabolites are exometabolites, and (iii) how metabolism varies between tissues and cellular compartments. However, even these qualitative network models are not yet complete. As our understanding improves so do we recognise more clearly the need for a systems (poly)pharmacology.

Bandana Barman,  John Osborne,  Naftali Kaminski … (2011)
Summary: Cytoscape is a popular bioinformatics package for biological network visualization and data integration. Version 2.8 introduces two powerful new features—Custom Node Graphics and Attribute Equations—which can be used jointly to greatly enhance Cytoscape's data integration and visualization capabilities. Custom Node Graphics allow an image to be projected onto a node, including images generated dynamically or at remote locations. Attribute Equations provide Cytoscape with spreadsheet-like functionality in which the value of an attribute is computed dynamically as a function of other attributes and network properties. Availability and implementation: Cytoscape is a desktop Java application released under the Library Gnu Public License (LGPL). Binary install bundles and source code for Cytoscape 2.8 are available for download from http://cytoscape.org. Contact: msmoot@ucsd.edu

Albert Barabasi,  Natali Gulbahce,  Joseph Loscalzo (2011)
Given the functional interdependencies between the molecular components in a human cell, a disease is rarely a consequence of an abnormality in a single gene, but reflects the perturbations of the complex intracellular and intercellular network that links tissue and organ systems. The emerging tools of network medicine offer a platform to explore systematically not only the molecular complexity of a particular disease, leading to the identification of disease modules and pathways, but also the molecular relationships among apparently distinct (patho)phenotypes. Advances in this direction are essential for identifying new disease genes, for uncovering the biological significance of disease-associated mutations identified by genome-wide association studies and full-genome sequencing, and for identifying drug targets and biomarkers for complex diseases.