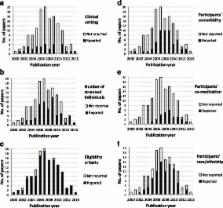 When reading a report of a clinical trial, it should be possible to judge whether the results are relevant for your patients. Issues affecting the external validity or generalizability of a trial should therefore be reported. Our aim was to determine whether articles with published results from a complete cohort of drug trials conducted entirely or partly in general practice reported sufficient information about the trials to consider the external validity.

A cohort of 196 drug trials in Norwegian general practice was previously identified from the Norwegian Medicines Agency archive with year of application for approval 1998–2007. After comprehensive literature searches, 134 journal articles reporting results published from 2000 to 2015 were identified. In these articles, we considered the reporting of the following issues relevant for external validity: reporting of the clinical setting; selection of patients before inclusion in a trial; reporting of patients’ co-morbidity, co-medication or ethnicity; choice of primary outcome; and reporting of adverse events.

The clinical setting of the trials, the selection of patients before enrolment, and co-morbidity or co-medication of participants was most commonly not reported, limiting the possibility to consider the generalizability of a trial. It may therefore be difficult for readers to judge whether drug trial results are applicable to clinical decision-making in general practice or when developing clinical guidelines.

The PRECIS-2 tool: designing trials that are fit for purpose.

Funded by: The Norwegian Research Fund for General Practice