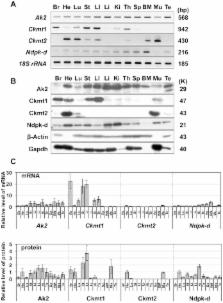 Adenine nucleotide dynamics in the mitochondrial intermembrane space (IMS) play a key role in oxidative phosphorylation. In a previous study, Drosophila adenylate kinase isozyme 2 ( Dak2) knockout was reported to cause developmental lethality at the larval stage in Drosophila melanogaster. In addition, two other studies reported that AK2 is a responsible gene for reticular dysgenesis (RD), a human disease that is characterized by severe combined immunodeficiency and deafness. Therefore, mitochondrial AK2 may play an important role in hematopoietic differentiation and ontogenesis. Three additional adenine nucleotide metabolizing enzymes, including mitochondrial creatine kinases (CKMT1 and CKMT2) and nucleoside diphosphate kinase isoform D (NDPK-D), have been found in IMS. Although these kinases generate ADP for ATP synthesis, their involvement in RD remains unclear and still an open question. In this study, mRNA and protein expressions of these mitochondrial kinases were firstly examined in mouse ES cells, day 8 embryos, and 7-week-old adult mice. It was found that their expressions are spatiotemporally regulated, and Ak2 is exclusively expressed in bone marrow, which is a major hematopoietic tissue in adults. In subsequent experiments, we identified increased expression of both AK2 and CKMT1 during macrophage differentiation and exclusive production of AK2 during neutrophil differentiation using HL-60 cells as an in vitro model of hematopoietic differentiation. Furthermore, AK2 knockdown specifically inhibited neutrophil differentiation without affecting macrophage differentiation. These data suggest that AK2 is indispensable for neutrophil differentiation and indicate a possible causative link between AK2 deficiency and neutropenia in RD.

The function of complexes between the outer mitochondrial membrane pore (VDAC) and the adenine nucleotide translocase in regulation of energy metabolism and apoptosis.

Dieter Brdiczka,  Mikhail Vyssokikh (2002)
The outer mitochondrial membrane pore (VDAC) changes its structure either voltage-dependently in artificial membranes or physiologically by interaction with the adenine nucleotide translocase (ANT) in the c-conformation. This interaction creates contact sites and leads in addition to a specific organisation of cytochrome c in the VDAC-ANT complexes. The VDAC structure that is specific for contact sites generates a signal at the surface for several proteins in the cytosol to bind with high capacity, such as hexokinase, glycerol kinase and Bax. If the VDAC binding site is not occupied by hexokinase, the VDAC-ANT complex has two critical qualities: firstly, Bax gets access to cytochrome c and secondly the ANT is set in its c-conformation that easily changes conformation into an unspecific channel (uniporter) causing permeability transition. Activity of bound hexokinase protects against both, it hinders Bax binding and employs the ANT as anti-porter. The octamer of mitochondrial creatine kinase binds to VDAC from the inner surface of the outer membrane. This firstly restrains interaction between VDAC and ANT and secondly changes the VDAC structure into low affinity for hexokinase and Bax. Cytochrome c in the creatine kinase complex will be differently organised, not accessible to Bax and the ANT is run as anti-porter by the active creatine kinase octamer. However, when, for example, free radicals cause dissociation of the octamer, VDAC interacts with the ANT with the same results as described above: Bax-dependent cytochrome c release and risk of permeability transition pore opening.

Release of adenylate kinase 2 from the mitochondrial intermembrane space during apoptosis.

T Noma,  R A Giove Nakazawa,  S Orrenius … (1999)
The release of two mitochondrial proteins, cytochrome c and apoptosis-inducing factor (AIF), into the soluble cytoplasm of cells undergoing apoptosis is well established. Using spectrophotometric determination of enzyme activity, the accumulation of adenylate kinase (AK) activity in the cytosolic fraction of apoptotic cells has also been observed recently. However, three isozymes, AK1, AK2 and AK3, have been characterized in mammalian cells and shown to be localized in the cytosol, mitochondrial intermembrane space and mitochondrial matrix, respectively, and it is unknown which one of these isozymes accumulates in the cytosol during apoptosis. We now demonstrate that in apoptotic cells only AK2 was translocated into the cytosol concomitantly with cytochrome c. The amount of AK1 in cytosol, as well as the amount of matrix-associated AK3, remained unchanged during the apoptotic process. Thus, our data suggest that only intermembrane proteins are released from mitochondria during the early phase of the apoptotic process.

This work was partly supported by a Grant-in-Aid for Young Scientists (B) 13278393) from the Ministry of Education, Science, Sports and Culture, a grant for the special scientific research program aimed at the improvement of QOL (Quality of Life) via oral function in collaboration with universities from the Ministry of Education, Culture, Sports, Science, and Technology, and a research grant supported by Kojinkai Foundation, and the President discretion research budget of the University of Tokushima. No additional external funding received for this study. The funders had no role in the study design, data collection and analysis, decision to publish, or preparation of the manuscript.