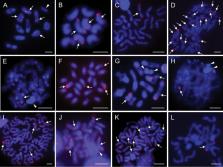 Spiders represent one of the most studied arachnid orders. They are particularly intriguing from a cytogenetic point of view, due to their complex and dynamic sex chromosome determination systems. Despite intensive research on this group, cytogenetic data from African spiders are still mostly lacking. In this study, we describe the karyotypes of 38 species of spiders belonging to 16 entelegyne families from South Africa and Namibia. In the majority of analysed families, the observed chromosome numbers and morphology (mainly acrocentric) did not deviate from the family-level cytogenetic characteristics based on material from other continents: Tetragnathidae (2n♂ = 24), Ctenidae and Oxyopidae (2n♂ = 28), Sparassidae (2n♂ = 42), Gnaphosidae , Trachelidae and Trochanteriidae (2n♂ = 22), and Salticidae (2n♂ = 28). On the other hand, we identified interspecific variability within Hersiliidae (2n♂ = 33 and 35), Oecobiidae (2n♂ = 19 and 25), Selenopidae (2n♂ = 26 and 29) and Theridiidae (2n♂ = 21 and 22). We examined the karyotypes of Ammoxenidae and Gallieniellidae for the first time. Their diploid counts (2n♂ = 22) correspond to the superfamily Gnaphosoidea and support their placement in this lineage. On the other hand, the karyotypes of Prodidominae (2n♂ = 28 and 29) contrast with all other Gnaphosoidea . Similarly, the unusually high diploid number in Borboropactus sp. (2n♂ = 28) within the otherwise cytogenetically uniform family Thomisidae (mainly 2n♂ = 21–24) supports molecular data suggesting a basal position of the genus in the family. The implementation of FISH methods for visualisation of rDNA clusters facilitated the detection of complex dynamics of numbers of these loci. We identified up to five loci of the 18S rDNA clusters in our samples. Three different sex chromosome systems (X0, X 1X 20 and X 1X 2X 30) were also detected among the studied taxa.

Nicole L. Garrison,  Juanita Rodriguez,  Ingi Agnarsson … (2016)
Spiders (Order Araneae) are massively abundant generalist arthropod predators that are found in nearly every ecosystem on the planet and have persisted for over 380 million years. Spiders have long served as evolutionary models for studying complex mating and web spinning behaviors, key innovation and adaptive radiation hypotheses, and have been inspiration for important theories like sexual selection by female choice. Unfortunately, past major attempts to reconstruct spider phylogeny typically employing the “usual suspect” genes have been unable to produce a well-supported phylogenetic framework for the entire order. To further resolve spider evolutionary relationships we have assembled a transcriptome-based data set comprising 70 ingroup spider taxa. Using maximum likelihood and shortcut coalescence-based approaches, we analyze eight data sets, the largest of which contains 3,398 gene regions and 696,652 amino acid sites forming the largest phylogenomic analysis of spider relationships produced to date. Contrary to long held beliefs that the orb web is the crowning achievement of spider evolution, ancestral state reconstructions of web type support a phylogenetically ancient origin of the orb web, and diversification analyses show that the mostly ground-dwelling, web-less RTA clade diversified faster than orb weavers. Consistent with molecular dating estimates we report herein, this may reflect a major increase in biomass of non-flying insects during the Cretaceous Terrestrial Revolution 125–90 million years ago favoring diversification of spiders that feed on cursorial rather than flying prey. Our results also have major implications for our understanding of spider systematics. Phylogenomic analyses corroborate several well-accepted high level groupings: Opisthothele, Mygalomorphae, Atypoidina, Avicularoidea, Theraphosoidina, Araneomorphae, Entelegynae, Araneoidea, the RTA clade, Dionycha and the Lycosoidea. Alternatively, our results challenge the monophyly of Eresoidea, Orbiculariae, and Deinopoidea. The composition of the major paleocribellate and neocribellate clades, the basal divisions of Araneomorphae, appear to be falsified. Traditional Haplogynae is in need of revision, as our findings appear to support the newly conceived concept of Synspermiata. The sister pairing of filistatids with hypochilids implies that some peculiar features of each family may in fact be synapomorphic for the pair. Leptonetids now are seen as a possible sister group to the Entelegynae, illustrating possible intermediates in the evolution of the more complex entelegyne genitalic condition, spinning organs and respiratory organs.

The spider tree of life: phylogeny of Araneae based on target-gene analyses from an extensive taxon sampling