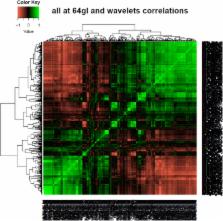 The aim of this multi-center study was to discover and validate radiomics classifiers as image-derived biomarkers for risk stratification of non-small-cell lung cancer (NSCLC).

Pre-therapy PET scans from a total of 358 Stage I–III NSCLC patients scheduled for radiotherapy/chemo-radiotherapy acquired between October 2008 and December 2013 were included in this seven-institution study. A semi-automatic threshold method was used to segment the primary tumors. Radiomics predictive classifiers were derived from a training set of 133 scans using TexLAB v2. Least absolute shrinkage and selection operator (LASSO) regression analysis was used for data dimension reduction and radiomics feature vector (FV) discovery. Multivariable analysis was performed to establish the relationship between FV, stage and overall survival (OS). Performance of the optimal FV was tested in an independent validation set of 204 patients, and a further independent set of 21 (TESTI) patients.

Of 358 patients, 249 died within the follow-up period [median 22 (range 0–85) months]. From each primary tumor, 665 three-dimensional radiomics features from each of seven gray levels were extracted. The most predictive feature vector discovered (FVX) was independent of known prognostic factors, such as stage and tumor volume, and of interest to multi-center studies, invariant to the type of PET/CT manufacturer. Using the median cut-off, FVX predicted a 14-month survival difference in the validation cohort ( N = 204, p = 0.00465; HR = 1.61, 95% CI 1.16–2.24). In the TESTI cohort, a smaller cohort that presented with unusually poor survival of stage I cancers, FVX correctly indicated a lack of survival difference ( N = 21, p = 0.501). In contrast to the radiomics classifier, clinically routine PET variables including SUV max, SUV mean and SUV peak lacked any prognostic information.

Ahmedin Jemal,  Freddie Bray,  Melissa M Center … (2015)
The global burden of cancer continues to increase largely because of the aging and growth of the world population alongside an increasing adoption of cancer-causing behaviors, particularly smoking, in economically developing countries. Based on the GLOBOCAN 2008 estimates, about 12.7 million cancer cases and 7.6 million cancer deaths are estimated to have occurred in 2008; of these, 56% of the cases and 64% of the deaths occurred in the economically developing world. Breast cancer is the most frequently diagnosed cancer and the leading cause of cancer death among females, accounting for 23% of the total cancer cases and 14% of the cancer deaths. Lung cancer is the leading cancer site in males, comprising 17% of the total new cancer cases and 23% of the total cancer deaths. Breast cancer is now also the leading cause of cancer death among females in economically developing countries, a shift from the previous decade during which the most common cause of cancer death was cervical cancer. Further, the mortality burden for lung cancer among females in developing countries is as high as the burden for cervical cancer, with each accounting for 11% of the total female cancer deaths. Although overall cancer incidence rates in the developing world are half those seen in the developed world in both sexes, the overall cancer mortality rates are generally similar. Cancer survival tends to be poorer in developing countries, most likely because of a combination of a late stage at diagnosis and limited access to timely and standard treatment. A substantial proportion of the worldwide burden of cancer could be prevented through the application of existing cancer control knowledge and by implementing programs for tobacco control, vaccination (for liver and cervical cancers), and early detection and treatment, as well as public health campaigns promoting physical activity and a healthier dietary intake. Clinicians, public health professionals, and policy makers can play an active role in accelerating the application of such interventions globally.

William Marslen-Wilson,  Michael J. M. Hay (2011)
Hypoxia is a feature of most tumours, albeit with variable incidence and severity within a given patient population. It is a negative prognostic and predictive factor owing to its multiple contributions to chemoresistance, radioresistance, angiogenesis, vasculogenesis, invasiveness, metastasis, resistance to cell death, altered metabolism and genomic instability. Given its central role in tumour progression and resistance to therapy, tumour hypoxia might well be considered the best validated target that has yet to be exploited in oncology. However, despite an explosion of information on hypoxia, there are still major questions to be addressed if the long-standing goal of exploiting tumour hypoxia is to be realized. Here, we review the two main approaches, namely bioreductive prodrugs and inhibitors of molecular targets upon which hypoxic cell survival depends. We address the particular challenges and opportunities these overlapping strategies present, and discuss the central importance of emerging diagnostic tools for patient stratification in targeting hypoxia.