Characterization of the 12S rRNA Gene Sequences of the Harvester Termite Anacanthotermes ochraceus (Blattodea: Hodotermitidae) and Its Role as A Bioindicator of Heavy Metal Accumulation Risks in Saudi Arabia 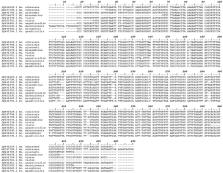 Termites are social insects of economic importance that have a worldwide distribution. Identifying termite species has traditionally relied on morphometric characters. Recently, several mitochondrial genes have been used as genetic markers to determine the correlation between different species. Heavy metal accumulation causes serious health problems in humans and animals. Being involved in the food chain, insects are used as bioindicators of heavy metals. In the present study, 100 termite individuals of Anacanthotermes ochraceus were collected from two Saudi Arabian localities with different geoclimatic conditions (Riyadh and Taif). These individuals were subjected to morphological identification followed by molecular analysis using mitochondrial 12S rRNA gene sequence, thus confirming the morphological identification of A. ochraceus. Furthermore, a phylogenetic analysis was conducted to determine the genetic relationship between the acquired species and other termite species with sequences previously submitted in the GenBank database. Several heavy metals including Ca, Al, Mg, Zn, Fe, Cu, Mn, Ba, Cr, Co, Be, Ni, V, Pb, Cd, and Mo were measured in both collected termites and soil samples from both study sites. All examined samples (termite and soil) showed high concentrations of metals with different concentrations and ratios. Generally, most measured metals had a significantly high concentration in soil and termites at Taif, except for Ca, Cd, Co, Cr, Cu, Mg, and Ni showing significantly high concentrations at Riyadh. Furthermore, termites accumulated higher amounts of heavy metals than the soil at both locations. The mean concentrations of the measured metals in soil samples were found to be in the descending order Ca ˃ Al ˃ Mg ˃ Zn ˃ Fe ˃ Cu ˃ Mn ˃ Ba ˃ Cr ˃ Co ˃ Be ˃ Ni ˃ V ˃ Pb ˃ Cd ˃ Mo, while it was Ca ˃ Mg ˃ Al ˃ Fe ˃ Zn ˃ Cu ˃ Mn ˃ Be ˃ Ba ˃ Pb ˃ Cr ˃ V ˃ Ni ˃ Cd ˃ Mo ˃ Co in termite specimens. The mean concentrations of the studied metals were determined in the soil and termite specimens at both locations. In addition, the contamination factor, pollution load index (PLI) and degree of contamination were calculated for all studied metals in different samples, indicating that both studied sites were polluted. However, Taif showed a significantly higher degree of pollution. Thus, the accurate identification of economically important insects, such as termites, is of crucial importance to plan for appropriate control strategies. In addition, termites are a good bioindicator to study land pollution.

Interactions of fungip with toxic metals

Carol Inward,  Paul Eggleton,  Daegan Inward … (2007)
The first comprehensive combined molecular and morphological phylogenetic analysis of the major groups of termites is presented. This was based on the analysis of three genes (cytochrome oxidase II, 12S and 28S) and worker characters for approximately 250 species of termites. Parsimony analysis of the aligned dataset showed that the monophyly of Hodotermitidae, Kalotermitidae and Termitidae were well supported, while Termopsidae and Rhinotermitidae were both paraphyletic on the estimated cladogram. Within Termitidae, the most diverse and ecologically most important family, the monophyly of Macrotermitinae, Foraminitermitinae, Apicotermitinae, Syntermitinae and Nasutitermitinae were all broadly supported, but Termitinae was paraphyletic. The pantropical genera Termes, Amitermes and Nasutitermes were all paraphyletic on the estimated cladogram, with at least 17 genera nested within Nasutitermes, given the presently accepted generic limits. Key biological features were mapped onto the cladogram. It was not possible to reconstruct the evolution of true workers unambiguously, as it was as parsimonious to assume a basal evolution of true workers and subsequent evolution of pseudergates, as to assume a basal condition of pseudergates and subsequent evolution of true workers. However, true workers were only found in species with either separate- or intermediate-type nests, so that the mapping of nest habit and worker type onto the cladogram were perfectly correlated. Feeding group evolution, however, showed a much more complex pattern, particularly within the Termitidae, where it proved impossible to estimate unambiguously the ancestral state within the family (which is associated with the loss of worker gut flagellates). However, one biologically plausible optimization implies an initial evolution from wood-feeding to fungus-growing, proposed as the ancestral condition within the Termitidae, followed by the very early evolution of soil-feeding and subsequent re-evolution of wood-feeding in numerous lineages.

Massimiliano Virgilio,  Thierry Backeljau,  Bruno Nevado … (2010)
Background Previous studies on insect DNA barcoding provide contradictory results and suggest not consistent performances across orders. This work aims at providing a general evaluation of insect DNA barcoding and "mini-barcoding" by performing simulations on a large database of 15,948 DNA barcodes. We compared the proportions of correctly identified queries across a) six insect orders (Coleoptera, Diptera, Hemiptera, Hymenoptera, Lepidoptera and Orthoptera), b) four identification criteria (Best Match: BM; Best Close Match: BCM; All Species Barcodes: ASB; tree-based identification: NJT), and c) reference databases with different taxon coverage (100, 500, 1,000, 1,500 and 1,995 insect species). Results Analysis of variance revealed highly significant differences among ID criteria and insect orders. A posteriori comparisons of means showed that NJT had always a significantly lower identification success (NJT = 0.656, S.D. = 0.118) compared to both BM and BCM (BM = 0.948, S.D. = 0.026; BCM = 0.946, S.D. = 0.031). NJT showed significant variations among orders, with the highest proportion of correctly identified queries in Hymenoptera and Orthoptera and the lowest in Diptera. Conversely, the proportions of correct matches of BM and BCM were consistent across orders but a progressive increase in false identification was observed when larger reference databases were used. Conclusions Regardless the relatively low proportion of Type I errors (misidentification of queries which are represented in the reference database) of BM and BCM, the lack of reference DNA barcodes for 98% of the known insect species implies that insect DNA barcoding is heavily biased by Type II errors (misidentification of queries without conspecifics in the database). The detrimental effects of Type II errors could be circumvented if insect DNA barcoding is used to verify the lack of correspondence between a query and a list of properly referenced target species (e.g. insect pests). This "negative identification" would only be subjected to Type I errors and could be profitably adopted in insect quarantine procedures.