The National LGBT Cancer Action Plan: A White Paper of the 2014 National Summit on Cancer in the LGBT Communities 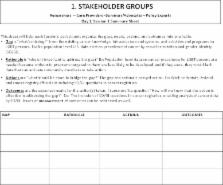 Despite growing social acceptance of lesbians, gay men, bisexuals, and transgender (LGBT) persons and the extension of marriage rights for same-sex couples, LGBT persons experience stigma and discrimination, including within the healthcare system. Each population within the LGBT umbrella term is likely at elevated risk for cancer due to prevalent, significant cancer risk factors, such as tobacco use and human immunodeficiency virus infection; however, cancer incidence and mortality data among LGBT persons are lacking. This absence of cancer incidence data impedes research and policy development, LGBT communities' awareness and activation, and interventions to address cancer disparities. In this context, in 2014, a 2-day National Summit on Cancer in the LGBT Communities was convened by a planning committee for the purpose of accelerating progress in identifying and addressing the LGBT communities' concerns and needs in the spheres of cancer research, clinical cancer care, healthcare policy, and advocacy for cancer survivorship and LGBT health equity. Summit participants were 56 invited persons from the United States, United Kingdom, and Canada, representatives of diverse identities, experiences, and knowledge about LGBT communities and cancer. Participants shared lessons learned and identified gaps and remedies regarding LGBT cancer concerns across the cancer care continuum from prevention to survivorship. This white paper presents background on each of the Summit themes and 16 recommendations covering the following: sexual orientation and gender identity data collection in national and state health surveys and research on LGBT communities and cancer, the clinical care of LGBT persons, and the education and training of healthcare providers.

Annual Report to the Nation on the status of cancer, 1975-2010, featuring prevalence of comorbidity and impact on survival among persons with lung, colorectal, breast, or prostate cancer.

E Simard,  Hyunsoon Cho,  Ahmedin Jemal … (2014)
The American Cancer Society (ACS), the Centers for Disease Control and Prevention (CDC), the National Cancer Institute (NCI), and the North American Association of Central Cancer Registries (NAACCR) collaborate annually to provide updates on cancer incidence and death rates and trends in these outcomes for the United States. This year's report includes the prevalence of comorbidity at the time of first cancer diagnosis among patients with lung, colorectal, breast, or prostate cancer and survival among cancer patients based on comorbidity level. Data on cancer incidence were obtained from the NCI, the CDC, and the NAACCR; and data on mortality were obtained from the CDC. Long-term (1975/1992-2010) and short-term (2001-2010) trends in age-adjusted incidence and death rates for all cancers combined and for the leading cancers among men and women were examined by joinpoint analysis. Through linkage with Medicare claims, the prevalence of comorbidity among cancer patients who were diagnosed between 1992 through 2005 residing in 11 Surveillance, Epidemiology, and End Results (SEER) areas were estimated and compared with the prevalence in a 5% random sample of cancer-free Medicare beneficiaries. Among cancer patients, survival and the probabilities of dying of their cancer and of other causes by comorbidity level, age, and stage were calculated. Death rates continued to decline for all cancers combined for men and women of all major racial and ethnic groups and for most major cancer sites; rates for both sexes combined decreased by 1.5% per year from 2001 through 2010. Overall incidence rates decreased in men and stabilized in women. The prevalence of comorbidity was similar among cancer-free Medicare beneficiaries (31.8%), breast cancer patients (32.2%), and prostate cancer patients (30.5%); highest among lung cancer patients (52.9%); and intermediate among colorectal cancer patients (40.7%). Among all cancer patients and especially for patients diagnosed with local and regional disease, age and comorbidity level were important influences on the probability of dying of other causes and, consequently, on overall survival. For patients diagnosed with distant disease, the probability of dying of cancer was much higher than the probability of dying of other causes, and age and comorbidity had a smaller effect on overall survival. Cancer death rates in the United States continue to decline. Estimates of survival that include the probability of dying of cancer and other causes stratified by comorbidity level, age, and stage can provide important information to facilitate treatment decisions. © 2013 American Cancer Society.

Cancer burden in the HIV-infected population in the United States.

Thomas Uldrick,  Meredith Shiels,  Emily H. Hall … (2011)
Effective antiretroviral therapy has reduced the risk of AIDS and dramatically prolonged the survival of HIV-infected people in the United States. Consequently, an increasing number of HIV-infected people are at risk of non-AIDS-defining cancers that typically occur at older ages. We estimated the annual number of cancers in the HIV-infected population, both with and without AIDS, in the United States. Incidence rates for individual cancer types were obtained from the HIV/AIDS Cancer Match Study by linking 15 HIV and cancer registries in the United States. Estimated counts of the US HIV-infected and AIDS populations were obtained from Centers for Disease Control and Prevention surveillance data. We obtained estimated counts of AIDS-defining (ie, Kaposi sarcoma, non-Hodgkin lymphoma, and cervical cancer) and non-AIDS-defining cancers in the US AIDS population during 1991-2005 by multiplying cancer incidence rates and AIDS population counts, stratified by year, age, sex, race and ethnicity, transmission category, and AIDS-relative time. We tested trends in counts and standardized incidence rates using linear regression models. We multiplied overall cancer rates and HIV-only (HIV infected, without AIDS) population counts, available from 34 US states during 2004-2007, to estimate cancers in the HIV-only population. All statistical tests were two-sided. The US AIDS population expanded fourfold from 1991 to 2005 (96,179 to 413,080) largely because of an increase in the number of people aged 40 years or older. During 1991-2005, an estimated 79 656 cancers occurred in the AIDS population. From 1991-1995 to 2001-2005, the estimated number of AIDS-defining cancers decreased by greater than threefold (34,587 to 10,325 cancers; P(trend) < .001), whereas non-AIDS-defining cancers increased by approximately threefold (3193 to 10,059 cancers; P(trend) < .001). From 1991-1995 to 2001-2005, estimated counts increased for anal (206 to 1564 cancers), liver (116 to 583 cancers), prostate (87 to 759 cancers), and lung cancers (875 to 1882 cancers), and Hodgkin lymphoma (426 to 897 cancers). In the HIV-only population in 34 US states, an estimated 2191 non-AIDS-defining cancers occurred during 2004-2007, including 454 lung, 166 breast, and 154 anal cancers. Over a 15-year period (1991-2005), increases in non-AIDS-defining cancers were mainly driven by growth and aging of the AIDS population. This growing burden requires targeted cancer prevention and treatment strategies.

Randall D Cebul,  Thomas E. Love,  Anil Jain … (2011)
Available studies have shown few quality-related advantages of electronic health records (EHRs) over traditional paper records. We compared achievement of and improvement in quality standards for diabetes at practices using EHRs with those at practices using paper records. All practices, including many safety-net primary care practices, belonged to a regional quality collaborative and publicly reported performance. We used generalized estimating equations to calculate the percentage-point difference between EHR-based and paper-based practices with respect to achievement of composite standards for diabetes care (including four component standards) and outcomes (five standards), after adjusting for covariates and accounting for clustering. In addition to insurance type (Medicare, commercial, Medicaid, or uninsured), patient-level covariates included race or ethnic group (white, black, Hispanic, or other), age, sex, estimated household income, and level of education. Analyses were conducted separately for the overall sample and for safety-net practices. From July 2009 through June 2010, data were reported for 27,207 adults with diabetes seen at 46 practices; safety-net practices accounted for 38% of patients. After adjustment for covariates, achievement of composite standards for diabetes care was 35.1 percentage points higher at EHR sites than at paper-based sites (P<0.001), and achievement of composite standards for outcomes was 15.2 percentage points higher (P=0.005). EHR sites were associated with higher achievement on eight of nine component standards. Such sites were also associated with greater improvement in care (a difference of 10.2 percentage points in annual improvement, P<0.001) and outcomes (a difference of 4.1 percentage points in annual improvement, P=0.02). Across all insurance types, EHR sites were associated with significantly higher achievement of care and outcome standards and greater improvement in diabetes care. Results confined to safety-net practices were similar. These findings support the premise that federal policies encouraging the meaningful use of EHRs may improve the quality of care across insurance types.

This Open Access article is distributed under the terms of the Creative Commons Attribution Noncommercial License ( http://creativecommons.org/licenses/by-nc/4.0/) which permits any noncommercial use, distribution, and reproduction in any medium, provided the original author(s) and the source are credited.