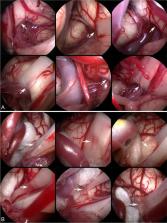 We aim to study factors that might influence the postoperative patterns and duration needed until final recovery.

Only patients following de-novo MVD with a minimum follow-up of 6 months were included. Overall trend of recovery was modeled. Patients were grouped according to recognizable clinical recovery patterns. Uni- and multivariable analyses were used to identify the factors affecting allocation to the identified patterns and time needed to final recovery.

A total of 323 (92.6%) patients had > 90% symptom improvement, and 269 (77.1%) patients had complete resolution at the last follow-up. The overall trend of recovery showed steep remission within the first 6 months, followed by relapse peaking around 8 months with a second remission ~ 16 months. Five main recovery patterns were identified.

Transparent Reporting of a multivariable prediction model for Individual Prognosis Or Diagnosis (TRIPOD): the TRIPOD Statement.

The long-term outcome of microvascular decompression for trigeminal neuralgia.

F G Barker, P J Jannetta, D Bissonette … (1996)
Several surgical procedures to treat trigeminal neuralgia (tic douloureux) are available, but most reports provide only short-term follow-up information. We describe the long-term results of surgery in 1185 patients who underwent microvascular decompression of the trigeminal nerve for medically intractable trigeminal neuralgia. The outcome of the procedure was assessed prospectively with annual questionnaires. Of the 1185 patients who underwent microvascular decompression during the 20-year study period, 1155 were followed for 1 year or more after the operation. The median follow-up period was 6.2 years. Most postoperative recurrences of tic took place in the first two years after surgery. Thirty percent of the patients had recurrences of tic during the study period, and 11 percent underwent second operations for the recurrences. Ten years after surgery, 70 percent of the patients (as determined by Kaplan-Meier analysis) had excellent final results-that is, they were free of pain without medication for tic. An additional 4 percent had occasional pain that did not require long-term medication. Ten years after the procedure, the annual rate of the recurrence of tic was less than 1 percent. Female sex, symptoms lasting more than eight years, venous compression of the trigeminal-root entry zone, and the lack of immediate postoperative cessation of tic were significant predictors of eventual recurrence. Having undergone a previous ablative procedure did not lessen a patient's likelihood of having a cessation of tic after microvascular decompression, but the rates of burning and aching facial pain, as reported on the last follow-up questionnaire, were higher if a trigeminal-ganglion lesion had been created with radiofrequency current before microvascular decompression. Major complications included two deaths shortly after the operation (0.2 percent) and one brain-stem infarction (0.1 percent). Sixteen patients (1 percent) had ipsilateral hearing loss. Microvascular decompression is a safe and effective treatment for trigeminal neuralgia, with a high rate of long-term success.