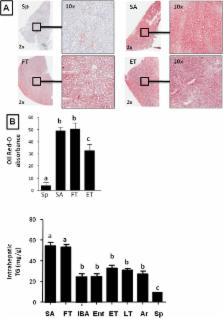 Hibernating animals develop fatty liver when active in summertime and undergo a switch to a fat oxidation state in the winter. We hypothesized that this switch might be determined by AMP and the dominance of opposing effects: metabolism through AMP deaminase (AMPD2) (summer) and activation of AMP-activated protein kinase (AMPK) (winter). Liver samples were obtained from 13-lined ground squirrels at different times during the year, including summer and multiples stages of winter hibernation, and fat synthesis and β-fatty acid oxidation were evaluated. Changes in fat metabolism were correlated with changes in AMPD2 activity and intrahepatic uric acid (downstream product of AMPD2), as well as changes in AMPK and intrahepatic β-hydroxybutyrate (a marker of fat oxidation). Hepatic fat accumulation occurred during the summer with relatively increased enzymes associated with fat synthesis (FAS, ACL and ACC) and decreased enoyl CoA hydratase (ECH1) and carnitine palmitoyltransferase 1A (CPT1A), rate limiting enzymes of fat oxidation. In summer, AMPD2 activity and intrahepatic uric acid levels were high and hepatic AMPK activity was low. In contrast, the active phosphorylated form of AMPK and β-hydroxybutyrate both increased during winter hibernation. Therefore, changes in AMPD2 and AMPK activity were paralleled with changes in fat synthesis and fat oxidation rates during the summer-winter cycle. These data illuminate the opposing forces of metabolism of AMP by AMPD2 and its availability to activate AMPK as a switch that governs fat metabolism in the liver of hibernating ground squirrel.

AMPK: a nutrient and energy sensor that maintains energy homeostasis.

D Hardie,  Fiona Ross,  Simon A. Hawley (2012)
AMP-activated protein kinase (AMPK) is a crucial cellular energy sensor. Once activated by falling energy status, it promotes ATP production by increasing the activity or expression of proteins involved in catabolism while conserving ATP by switching off biosynthetic pathways. AMPK also regulates metabolic energy balance at the whole-body level. For example, it mediates the effects of agents acting on the hypothalamus that promote feeding and entrains circadian rhythms of metabolism and feeding behaviour. Finally, recent studies reveal that AMPK conserves ATP levels through the regulation of processes other than metabolism, such as the cell cycle and neuronal membrane excitability.

Alice Shaw,  Maria M Mihaylova,  Leon Shaw (2011)
One of the central regulators of cellular and organismal metabolism in eukaryotes is AMP-activated protein kinase (AMPK), which is activated when intracellular ATP production decreases. AMPK has critical roles in regulating growth and reprogramming metabolism, and has recently been connected to cellular processes such as autophagy and cell polarity. Here we review a number of recent breakthroughs in the mechanistic understanding of AMPK function, focusing on a number of newly identified downstream effectors of AMPK.

AMP-activated protein kinase: an energy sensor that regulates all aspects of cell function.

D. Grahame Hardie (2011)
AMP-activated protein kinase (AMPK) is a sensor of energy status that maintains cellular energy homeostasis. It arose very early during eukaryotic evolution, and its ancestral role may have been in the response to starvation. Recent work shows that the kinase is activated by increases not only in AMP, but also in ADP. Although best known for its effects on metabolism, AMPK has many other functions, including regulation of mitochondrial biogenesis and disposal, autophagy, cell polarity, and cell growth and proliferation. Both tumor cells and viruses establish mechanisms to down-regulate AMPK, allowing them to escape its restraining influences on growth.

Competing Interests: Drs MAL, CJR, GEG and RJJ are listed as inventors on a patent for the use of AMPD2 inhibitors to treat obesity and insulin resistance (US 8,697, 628). MAL, CJR, LGSL, CARJ and RJJ are also members of Colorado Research Partners LLC that is interested in developing novel treatments for obesity. There are no further patents, products in development or marketed products to declare. This does not alter the authors' adherence to all the PLOS ONE policies on sharing data and materials, as detailed online in the guide for authors.

This work is supported by NIH grants HL68607, RC4 DK90859 and startup funds from the University of Colorado to RJJ and grant HL089049 to SLM for support of the animal samples. The funders had no role in study design, data collection and analysis, decision to publish, or preparation of the manuscript.