Burden of dengue among febrile patients at the time of chikungunya introduction in Piedecuesta, Colombia 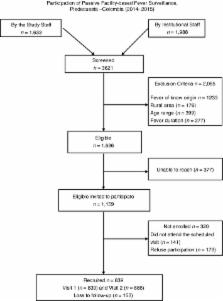 To estimate the age‐specific incidence of symptomatic dengue and chikungunya in Colombia.

Of 839 febrile participants 686 completed the study. There were 33.2% (295/839) dengue infections (51% primary infections), and 35.9% (191/532) of negative dengue cases there were chikungunya cases. On average, dengue cases were younger (median = 18 years) than chikungunya cases (median = 25 years). Thrombocytopaenia and abdominal pain were the main dengue predictors, while presence of rash was the main predictor for chikungunya diagnosis. Underreporting of dengue was 31%; the estimated expansion factors indicate an underreporting rate of dengue cases of threefold for all cases and of almost sixfold for inpatients.

These findings highlight the ongoing coexistence of both arboviruses, a distinct clinical profile of each condition in the study area that could be used by clinicians to generate a differential diagnosis, and the presence of underreporting, mostly among hospitalised cases.

The emergence of arthropod-borne viral diseases: A global prospective on dengue, chikungunya and zika fevers

Sandra V Mayer,  Robert B. Tesh,  Nikos Vasilakis (2016)
Highlights • Arboviruses are still expanding their geographic distribution and causing significant public health impact around the world. • DENV, CHIKV and ZIKV are mosquito-transmitted pathogens posing a threat to human health in many regions of the world. • Global travel and trade have facilitated the emergence of vector-borne diseases. • Surveillance of areas close to the forest is important to monitor the emergence of pathogens from their sylvatic cycle.

Bradley R. King,  Eric S. Halsey,  Stalin Vilcarromero … (2014)
Infectious disease models play a key role in public health planning. These models rely on accurate estimates of key transmission parameters such as the force of infection (FoI), which is the per-capita risk of a susceptible person being infected. The FoI captures the fundamental dynamics of transmission and is crucial for gauging control efforts, such as identifying vaccination targets. Dengue virus (DENV) is a mosquito-borne, multiserotype pathogen that currently infects ∼390 million people a year. Existing estimates of the DENV FoI are inaccurate because they rely on the unrealistic assumption that risk is constant over time. Dengue models are thus unreliable for designing vaccine deployment strategies. Here, we present to our knowledge the first time-varying (daily), serotype-specific estimates of DENV FoIs using a spline-based fitting procedure designed to examine a 12-y, longitudinal DENV serological dataset from Iquitos, Peru (11,703 individuals, 38,416 samples, and 22,301 serotype-specific DENV infections from 1999 to 2010). The yearly DENV FoI varied markedly across time and serotypes (0-0.33), as did daily basic reproductive numbers (0.49-4.72). During specific time periods, the FoI fluctuations correlated across serotypes, indicating that different DENV serotypes shared common transmission drivers. The marked variation in transmission intensity that we detected indicates that intervention targets based on one-time estimates of the FoI could underestimate the level of effort needed to prevent disease. Our description of dengue virus transmission dynamics is unprecedented in detail, providing a basis for understanding the persistence of this rapidly emerging pathogen and improving disease prevention programs.

Dengue in Thailand and Cambodia: An Assessment of the Degree of Underrecognized Disease Burden Based on Reported Cases