Pathview: an R/Bioconductor package for pathway-based data integration and visualization 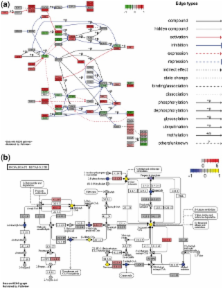 Summary: Pathview is a novel tool set for pathway-based data integration and visualization. It maps and renders user data on relevant pathway graphs. Users only need to supply their data and specify the target pathway. Pathview automatically downloads the pathway graph data, parses the data file, maps and integrates user data onto the pathway and renders pathway graphs with the mapped data. Although built as a stand-alone program, Pathview may seamlessly integrate with pathway and functional analysis tools for large-scale and fully automated analysis pipelines.

Availability: The package is freely available under the GPLv3 license through Bioconductor and R-Forge. It is available at http://bioconductor.org/packages/release/bioc/html/pathview.html and at http://Pathview.r-forge.r-project.org/.

MetPA: a web-based metabolomics tool for pathway analysis and visualization.

David Wishart,  Jianguo Xia (2010)
MetPA (Metabolomics Pathway Analysis) is a user-friendly, web-based tool dedicated to the analysis and visualization of metabolomic data within the biological context of metabolic pathways. MetPA combines several advanced pathway enrichment analysis procedures along with the analysis of pathway topological characteristics to help identify the most relevant metabolic pathways involved in a given metabolomic study. The results are presented in a Google-map style network visualization system that supports intuitive and interactive data exploration through point-and-click, dragging and lossless zooming. Additional features include a comprehensive compound library for metabolite name conversion, automatic generation of analysis report, as well as the implementation of various univariate statistical procedures that can be accessed when users click on any metabolite node on a pathway map. MetPA currently enables analysis and visualization of 874 metabolic pathways, covering 11 common model organisms. Freely available at http://metpa.metabolomics.ca.

KEGGgraph: a graph approach to KEGG PATHWAY in R and bioconductor

Jitao David Zhang,  Stefan Wiemann (2009)
Motivation: KEGG PATHWAY is a service of Kyoto Encyclopedia of Genes and Genomes (KEGG), constructing manually curated pathway maps that represent current knowledge on biological networks in graph models. While valuable graph tools have been implemented in R/Bioconductor, to our knowledge there is currently no software package to parse and analyze KEGG pathways with graph theory. Results: We introduce the software package KEGGgraph in R and Bioconductor, an interface between KEGG pathways and graph models as well as a collection of tools for these graphs. Superior to existing approaches, KEGGgraph captures the pathway topology and allows further analysis or dissection of pathway graphs. We demonstrate the use of the package by the case study of analyzing human pancreatic cancer pathway. Availability:KEGGgraph is freely available at the Bioconductor web site (http://www.bioconductor.org). KGML files can be downloaded from KEGG FTP site (ftp://ftp.genome.jp/pub/kegg/xml). Contact: j.zhang@dkfz-heidelberg.de Supplementary information: Supplementary data are available at Bioinformatics online.

Bertrand Perroud,  Jinoo Lee,  Nelly Valkova … (2006)
Background Renal cell carcinoma (RCC) is the sixth leading cause of cancer death and is responsible for 11,000 deaths per year in the US. Approximately one-third of patients present with disease which is already metastatic and for which there is currently no adequate treatment, and no biofluid screening tests exist for RCC. In this study, we have undertaken a comprehensive proteomic analysis and subsequently a pathway and network approach to identify biological processes involved in clear cell RCC (ccRCC). We have used these data to investigate urinary markers of RCC which could be applied to high-risk patients, or to those being followed for recurrence, for early diagnosis and treatment, thereby substantially reducing mortality of this disease. Results Using 2-dimensional electrophoresis and mass spectrometric analysis, we identified 31 proteins which were differentially expressed with a high degree of significance in ccRCC as compared to adjacent non-malignant tissue, and we confirmed some of these by immunoblotting, immunohistochemistry, and comparison to published transcriptomic data. When evaluated by several pathway and biological process analysis programs, these proteins are demonstrated to be involved with a high degree of confidence (p values < 2.0 E-05) in glycolysis, propanoate metabolism, pyruvate metabolism, urea cycle and arginine/proline metabolism, as well as in the non-metabolic p53 and FAS pathways. In a pilot study using random urine samples from both ccRCC and control patients, we performed metabolic profiling and found that only sorbitol, a component of an alternative glycolysis pathway, is significantly elevated at 5.4-fold in RCC patients as compared to controls. Conclusion Extensive pathway and network analysis allowed for the discovery of highly significant pathways from a set of clear cell RCC samples. Knowledge of activation of these processes will lead to novel assays identifying their proteomic and/or metabolomic signatures in biofluids of patient at high risk for this disease; we provide pilot data for such a urinary bioassay. Furthermore, we demonstrate how the knowledge of networks, processes, and pathways altered in kidney cancer may be used to influence the choice of optimal therapy.

*To whom correspondence should be addressed.