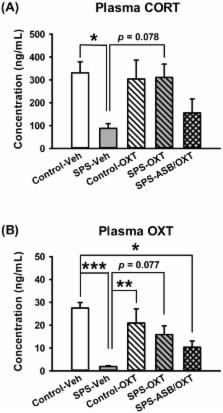 Posttraumatic stress disorder (PTSD) is a trauma-induced mental disorder characterized by fear extinction abnormalities, which involve biological dysfunctions among fear circuit areas in the brain. Oxytocin (OXT) is a neuropeptide that regulates sexual reproduction and social interaction and has recently earned specific attention due to its role in adjusting neurobiological and behavioral correlates of PTSD; however, the mechanism by which this is achieved remains unclear. The present study aimed to examine whether the effects of OXT on traumatic stress-induced abnormalities of fear extinction (specifically induced by single prolonged stress (SPS), an animal model of PTSD) are associated with pro-inflammatory cytokines. Seven days after SPS, rats received intranasal OXT 40 min before a cue-dependent Pavlovian fear conditioning-extinction test in which rats’ freezing degree was used to reflect the outcome of fear extinction. We also measured mRNA expression of IL-1β, IFN-γ, and TNF-α in the medial prefrontal cortex (mPFC), hippocampus, and amygdala at the end of the study, together with plasma oxytocin, corticosterone, IL-1β, IFN-γ, and TNF-α, to reflect the central and peripheral changes of stress-related hormones and cytokines after SPS. Our results suggested that intranasal OXT effectively amends the SPS-impaired behavior of fear extinction retrieval. Moreover, it neurochemically reverses the SPS increase in pro-inflammatory cytokines; thus, IL-1β and IFN-γ can be further blocked by the OXT antagonist atosiban (ASB) in the hippocampus. Peripheral profiles revealed a similar response pattern to SPS of OXT and corticosterone (CORT), and the SPS-induced increase in plasma levels of IL-1β and TNF-α could be reduced by OXT. The present study suggests potential therapeutic effects of OXT in both behavioral and neuroinflammatory profiles of PTSD.

Mohammed Milad,  Roger K. Pitman,  Cameron B. Ellis … (2009)
A clinical characteristic of posttraumatic stress disorder (PTSD) is persistently elevated fear responses to stimuli associated with the traumatic event. The objective herein is to determine whether extinction of fear responses is impaired in PTSD and whether such impairment is related to dysfunctional activation of brain regions known to be involved in fear extinction, viz., amygdala, hippocampus, ventromedial prefrontal cortex (vmPFC), and dorsal anterior cingulate cortex (dACC). Sixteen individuals diagnosed with PTSD and 15 trauma-exposed non-PTSD control subjects underwent a 2-day fear conditioning and extinction protocol in a 3-T functional magnetic resonance imaging scanner. Conditioning and extinction training were conducted on day 1. Extinction recall (or extinction memory) test was conducted on day 2 (extinguished conditioned stimuli presented in the absence of shock). Skin conductance response (SCR) was scored throughout the experiment as an index of the conditioned response. The SCR data revealed no significant differences between groups during acquisition and extinction of conditioned fear on day 1. On day 2, however, PTSD subjects showed impaired recall of extinction memory. Analysis of functional magnetic resonance imaging data showed greater amygdala activation in the PTSD group during day 1 extinction learning. During extinction recall, lesser activation in hippocampus and vmPFC and greater activation in dACC were observed in the PTSD group. The magnitude of extinction memory across all subjects was correlated with activation of hippocampus and vmPFC during extinction recall testing. These findings support the hypothesis that fear extinction is impaired in PTSD. They further suggest that dysfunctional activation in brain structures that mediate fear extinction learning, and especially its recall, underlie this impairment.

Gregory J. Quirk,  Ekaterina Likhtik,  Joe Pelletier … (2003)
In extinction of auditory fear conditioning, rats learn that a tone no longer predicts the occurrence of a footshock. Recent lesion and unit recording studies suggest that the medial prefrontal cortex (mPFC) plays an essential role in the inhibition of conditioned fear following extinction. mPFC has robust projections to the amygdala, a structure that is known to mediate the acquisition and expression of conditioned fear. Fear conditioning potentiates the tone responses of neurons in the basolateral amygdala (BLA), which excite neurons in the central nucleus (Ce) of the amygdala. In turn, the Ce projects to the brainstem and hypothalamic areas that mediate fear responses. The present study was undertaken to test the hypothesis that the mPFC inhibits conditioned fear via feedforward inhibition of Ce output neurons. Recording extracellularly from physiologically identified brainstem-projecting Ce neurons, we tested the effect of mPFC prestimulation on Ce responsiveness to synaptic input. In support of our hypothesis, mPFC prestimulation dramatically reduced the responsiveness of Ce output neurons to inputs from the insular cortex and BLA. Thus, our findings support the idea that mPFC gates impulse transmission from the BLA to Ce, perhaps through GABAergic intercalated cells, thereby gating the expression of conditioned fear.