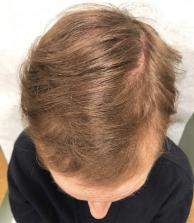 ScienceOpenPublisherPMC
Bookmark
There is no author summary for this article yet. Authors can add summaries to their articles on ScienceOpen to make them more accessible to a non-specialist audience.
Introduction Alopecia areata (AA) is an autoimmune, nonscarring alopecic disorder with a lifetime prevalence of about 2%. 1 This disorder presents with varying amounts of hair loss, ranging from focal patchy loss to entire scalp and body hair loss as in alopecia totalis (AT) and alopecia universalis (AU), respectively. Severe subtypes are difficult to treat and contribute to significant patient burden. Current treatment strategies center on immunomodulation, both systemically and topically. Systemic therapies such as oral corticosteroids, cyclosporine, and methotrexate can be efficacious, with regrowth rates between 30% and 76%. 2 However, side-effect profiles, lengthy treatment durations, and relapse rates after discontinuation of therapy limit their use. 2 Newer Janus kinase (JAK) inhibitors appear promising, yet patients relapse after treatment cessation, and cost is often prohibitive. 3 Topical glucocorticoids offer variable efficacy; 17.8% of patients with AT or AU had long-term regrowth with clobetasol use. 4 Topical calcineurin inhibitors have not demonstrated efficacy, perhaps because of insufficient depth of penetration. 5 Intralesional triamcinolone at concentrations of 2.5 to 5 mg/mL are considered first-line therapy with regrowth seen in 61% of subjects with AT at 6 weeks and minimal side effects.2, 6 An additional therapeutic option used for more severe forms of AA is the topical immunomodulator, diphenylcyclopropenone (DPCP). Although the exact mechanism of DPCP is unknown, its resultant allergic contact dermatitis is thought to cause antigenic competition and an alteration of the inflammatory cytokine milieu.2, 7 In one retrospective study of 50 patients treated with DPCP, terminal hair regrowth of 50% or more was seen in 56% and 71% of those with AU and AT, respectively. 7 Anthralin (dithranol), available in 0.25% to 1% concentrations, is another topical treatment option. Anthralin functions via the production of a localized irritant dermatitis with resultant pruritus, erythema, and scale. Patients who do not have a robust inflammatory response to anthralin may not achieve significant therapeutic response. 2 Response rates with anthralin in AA and AT are between 25% and 75%. 2 Combination treatment strategies may provide a more robust therapeutic response, such as the combination of minoxodil with topical glucocorticoids and anthralin with DPCP.2, 8 Calcipotriol/calcipotriene is a topical vitamin D3 analogue commonly used in plaque psoriasis. Recently, a significant benefit of combination therapy with calcipotriol and 5-fluorouracil has been identified in the treatment of actinic keratoses. 9 When used together, these medications show a synergistic mechanism of action, perhaps because of calcipotriol's induction of antitumor immunity and allergic skin inflammation via thymic stromal lymphopoietin cytokine. 9 The efficacy of this combination offers a potential corollary for the treatment of additional dermatologic conditions in which immunomodulation plays a key role. The combination of anthralin and calcipotriene may likewise demonstrate synergistic effects in the treatment of AA. Case report A 39 year-old woman presented with a 20-year history of hair loss involving the scalp and eyebrows. Her personal medical history was significant only for eczema, and she had no family history of AA or other autoimmune disorders. The diagnosis of AA was made by physical examination, which found diffuse patchy alopecia of the scalp without erythema, scaling, or loss of follicular ostia (Figs 1 and 2). Near complete loss of eyebrow hair was noted. Nail pitting was present. Fig 1 Before therapy. Frontal and temporal scalp with patchy alopecic patches without loss of follicular ostia. Fig 2 Before therapy. Temporal, vertex and occipital scalp with patchy alopecic patches without loss of follicular ostia. She was previously treated with intralesional triamcinolone (2.5-5 mg/mL) over the course of 5 years with minimal improvement. She was started on whole scalp anthralin 1% shampoo for 15 minutes nightly, increased to 90 minutes nightly for more than 2 months, but she denied the development of any scalp irritation or regrowth. Next, a combination of anthralin 1% cream with calcipotriene 0.005% cream was applied topically with duration of application increased from 5 minutes to 90 minutes as tolerated for 5 days per week. The anticipated side effect of scalp irritation with associated pruritus, erythema, and scale then developed. Physical examination found increased hair density with background scalp erythema. Eyebrow hair regrowth was not seen. Clinical response is illustrated in Figs 3 and 4). The combination of anthralin and calcipotriene resulted in visible hair regrowth with satisfactory cosmetic results that were maintained through follow-up at 8 months. There were no adverse or unanticipated events. Fig 3 After therapy. Frontal and temporal scalp with increased hair density. Mild erythema and scaling of the scalp are seen. Fig 4 After therapy. Temporal, vertex, and occipital scalp with increased hair density. Discussion We theorize that the combination of anthralin and calcipotriene promotes a robust inflammatory response that may be useful in treatment-refractory AA. Anthralin functions by inducing an irritant dermatitis, shifting T lymphocyte inflammation away from hair follicles to the epidermis. It is well established that calcipotriene also causes an irritant dermatitis; therefore, its concomitant use may bolster the resultant irritant dermatitis, potentially hastening and/or amplifying clinical responses. However, calcipotriene can also cause an allergic contact dermatitis, likely via expression of cytokine thymic stromal lymphopoietin, which adds an additional mechanism of immunomodulation.9, 10 This patient's response can likely be attributed to combination therapy, as previous treatment did not provide satisfactory regrowth, and diffuse AA is severe and thus less likely to spontaneously remit. Further studies are needed to better understand concomitant use of anthralin and calcipotriene in the promotion of hair regrowth in AA, which may provide an attractive option for patients preferring topical over systemic therapy.

Abdullah Alkhalifah, Adel Alsantali, Eddy Wang … (2010)
Alopecia areata (AA) is an autoimmune disease that presents as nonscarring hair loss, although the exact pathogenesis of the disease remains to be clarified. Disease prevalence rates from 0.1% to 0.2% have been estimated for the United States. AA can affect any hair-bearing area. It often presents as well demarcated patches of nonscarring alopecia on skin of overtly normal appearance. Recently, newer clinical variants have been described. The presence of AA is associated with a higher frequency of other autoimmune diseases. Controversially, there may also be increased psychiatric morbidity in patients with AA. Although some AA features are known poor prognostic signs, the course of the disease is unpredictable and the response to treatment can be variable. Part one of this two-part series on AA describes the clinical presentation and the associated histopathologic picture. It also proposes a hypothesis for AA development based on the most recent knowledge of disease pathogenesis. After completing this learning activity, participants should be familiar with the most recent advances in AA pathogenesis, recognize the rare and recently described variants of AA, and be able to distinguish between different histopathologic stages of AA. Copyright (c) 2009 American Academy of Dermatology, Inc. Published by Mosby, Inc. All rights reserved.

Abdullah Alkhalifah, Adel Alsantali, Eddy Wang … (2010)
Various therapeutic agents have been described for the treatment of alopecia areata (AA), but none are curative or preventive. The aim of AA treatment is to suppress the activity of the disease. The high rate of spontaneous remission and the paucity of randomized, double-blind, placebo-controlled studies make the evidence-based assessment of these therapies difficult. The second part of this two-part series on AA discusses treatment options in detail and suggests treatment plans according to specific disease presentation. It also reviews recently reported experimental treatment options and potential directions for future disease management. After completing this learning activity, participants should be able to compare the efficacy and safety of various treatment options, formulate a treatment plan tailored to individual patients, and recognize recently described treatments and potential therapeutic approaches. Copyright (c) 2009 American Academy of Dermatology, Inc. Published by Mosby, Inc. All rights reserved.

Trevor J Cunningham, Mary Tabacchi, Jean-Pierre Eliane … (2016)
Actinic keratosis is a precursor to cutaneous squamous cell carcinoma. Long treatment durations and severe side effects have limited the efficacy of current actinic keratosis treatments. Thymic stromal lymphopoietin (TSLP) is an epithelium-derived cytokine that induces a robust antitumor immunity in barrier-defective skin. Here, we investigated the efficacy of calcipotriol, a topical TSLP inducer, in combination with 5-fluorouracil (5-FU) as an immunotherapy for actinic keratosis.