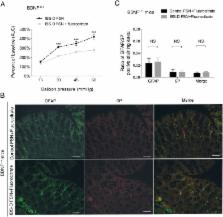 The over-expressed colonic brain-derived neurotrophic factor (BDNF) has been reported to be associated with abdominal pain in patients with irritable bowel syndrome (IBS). However, the neuropathological mechanism is unclear. We here investigated the involvement of enteroglial cells (EGCs) and enteric nerves in IBS-like visceral hypersensitivity. We showed that glial fibrillary acidic protein (GFAP), tyrosine receptor kinase B (TrkB) and substance P (SP) were significantly increased in the colonic mucosa of IBS patients. The upregulation of those proteins was also observed in the colon of mice with visceral hypersensitivity, but not in the colon of BDNF +/− mice. Functionally, TrkB or EGC inhibitors, or BDNF knockdown significantly suppressed visceral hypersensitivity in mice. Using the EGC cell line, we found that recombinant human BDNF (r-HuBDNF) could directly activate EGCs via the TrkB-phospholipase Cγ1 pathway, thereby inducing a significant upregulation of SP. Moreover, supernatants from r-HuBDNF-activated EGC culture medium, rather than r-HuBDNF alone, triggered markedly augmented discharges in isolated intestinal mesenteric afferent nerves. r-HuBDNF alone could cause mesenteric afferent mechanical hypersensitivity independently, and this effect was synergistically enhanced by activated EGCs. We conclude that EGC-enteric nerve unit may be involved in IBS-like visceral hypersensitivity, and this process is likely initiated by BDNF-TrkB pathway activation.

R Snaith,  S Zigmond (1983)
A self-assessment scale has been developed and found to be a reliable instrument for detecting states of depression and anxiety in the setting of an hospital medical outpatient clinic. The anxiety and depressive subscales are also valid measures of severity of the emotional disorder. It is suggested that the introduction of the scales into general hospital practice would facilitate the large task of detection and management of emotional disorder in patients under investigation and treatment in medical and surgical departments.

L F Reichardt (2006)
Neurotrophins are a family of closely related proteins that were identified initially as survival factors for sensory and sympathetic neurons, and have since been shown to control many aspects of survival, development and function of neurons in both the peripheral and the central nervous systems. Each of the four mammalian neurotrophins has been shown to activate one or more of the three members of the tropomyosin-related kinase (Trk) family of receptor tyrosine kinases (TrkA, TrkB and TrkC). In addition, each neurotrophin activates p75 neurotrophin receptor (p75NTR), a member of the tumour necrosis factor receptor superfamily. Through Trk receptors, neurotrophins activate Ras, phosphatidyl inositol-3 (PI3)-kinase, phospholipase C-gamma1 and signalling pathways controlled through these proteins, such as the MAP kinases. Activation of p75NTR results in activation of the nuclear factor-kappaB (NF-kappaB) and Jun kinase as well as other signalling pathways. Limiting quantities of neurotrophins during development control the number of surviving neurons to ensure a match between neurons and the requirement for a suitable density of target innervation. The neurotrophins also regulate cell fate decisions, axon growth, dendrite growth and pruning and the expression of proteins, such as ion channels, transmitter biosynthetic enzymes and neuropeptide transmitters that are essential for normal neuronal function. Continued presence of the neurotrophins is required in the adult nervous system, where they control synaptic function and plasticity, and sustain neuronal survival, morphology and differentiation. They also have additional, subtler roles outside the nervous system. In recent years, three rare human genetic disorders, which result in deleterious effects on sensory perception, cognition and a variety of behaviours, have been shown to be attributable to mutations in brain-derived neurotrophic factor and two of the Trk receptors.

Parwinder Grewal,  Songtao Jia (2006)
The formation of heterochromatin, which requires methylation of histone H3 at lysine 9 and the subsequent recruitment of chromodomain proteins such as heterochromatin protein HP1, serves as a model for the role of histone modifications and chromatin assembly in epigenetic control of the genome. Recent studies in Schizosaccharomyces pombe indicate that heterochromatin serves as a dynamic platform to recruit and spread a myriad of regulatory proteins across extended domains to control various chromosomal processes, including transcription, chromosome segregation and long-range chromatin interactions.