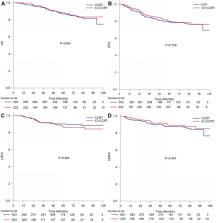 The aim of this study was to evaluate the efficacy of induction chemotherapy (IC) in nasopharyngeal carcinoma (NPC) patients with moderate-risk treated with intensity-modulated radiotherapy (IMRT).

We retrospectively assessed 506 patients with T1-2N1M0 or T3-4N0-1M0 NPC (according to the 2010 UICC/AJCC staging system) who received concurrent chemoradiotherapy (CCRT) with or without IC at a single center in China between 2005 and 2010. Survival outcomes were compared between the IC + CCRT and CCRT groups using the Kaplan–Meier method, Log-rank test and a Cox regression model.

Addition of IC to CCRT does not improve survival outcomes in moderate-risk NPC; the use of IC should be carefully considered in these patients, though additional prospective trials are warranted to confirm the conclusions of this study.

G Fountzilas,  E Ciuleanu,  M Bobos … (2012)
Concomitant administration of radiation therapy (RT) and chemotherapy with cisplatin (CCRT) is considered standard treatment in patients with locally advanced nasopharyngeal cancer (LA-NPC). The role of induction chemotherapy (IC) when followed by CCRT in improving locoregional control remains controversial. Totally, 141 eligible patients with LA-NPC were randomized to either three cycles of IC with cisplatin 75 mg/m(2), epirubicin 75 mg/m(2) and paclitaxel (Taxol) 175 mg/m(2) (CEP) every 3 weeks followed by definitive RT (70 Gy) and concomitant weekly infusion of cisplatin 40 mg/m(2) (investigational arm, 72 patients) or to the same CCRT regimen alone (control arm, 69 patients). Sixty-two patients (86%) received three cycles of IC. No difference between the arms was observed in the number of patients who completed RT (61 versus 64, P = 018). Overall and complete response rates were very similar in the two arms and so were 3-year progression-free and overall survival rates. Grade III or IV toxic effects from IC were infrequent, apart of alopecia. Mucositis, weight loss and leukopenia were the most prominent side-effects from CCRT. IC with three cycles of CEP when followed by CCRT did not significantly improve response rates and/or survival compared with that of CCRT alone.

Susan Loong,  Chao-Nan Qian,  Joseph Tien-Seng Wee … (2010)
Nasopharyngeal cancer (NPC) is endemic in Southern China, with Guandong province and Hong Kong reporting some of the highest incidences in the world. The journal Science has called it a "Cantonese cancer". We propose that in fact NPC is a cancer that originated in the Bai Yue ("proto Tai Kadai" or "proto Austronesian" or "proto Zhuang") peoples and was transmitted to the Han Chinese in southern China through intermarriage. However, the work by John Ho raised the profile of NPC, and because of the high incidence of NPC in Hong Kong and Guangzhou, NPC became known as a Cantonese cancer. We searched historical articles, articles cited in PubMed, Google, monographs, books and Internet articles relating to genetics of the peoples with high populations of NPC. The migration history of these various peoples was extensively researched, and where possible, their genetic fingerprint identified to corroborate with historical accounts. Genetic and anthropological evidence suggest there are a lot of similarities between the Bai Yue and the aboriginal peoples of Borneo and Northeast India; between Inuit of Greenland, Austronesian Mayalo Polynesians of Southeast Asia and Polynesians of Oceania, suggesting some common ancestry. Genetic studies also suggest the present Cantonese, Minnans and Hakkas are probably an admixture of northern Han and southern Bai Yue. All these populations have a high incidence of NPC. Very early contact between southern Chinese and peoples of East Africa and Arabia can also account for the intermediate incidence of NPC in these regions.

This research did not receive any specific grant from funding agencies in the public, commercial, or not-for-profit sectors.