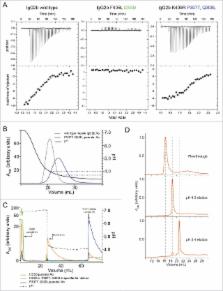 The increased number of bispecific antibodies (BsAb) under therapeutic development has resulted in a need for mouse surrogate BsAbs. Here, we describe a one-step method for generating highly pure mouse BsAbs suitable for in vitro and in vivo studies. We identify two mutations in the mouse IgG2a and IgG2b Fc region: one that eliminates protein A binding and one that enhances protein A binding by 8-fold. We show that BsAbs harboring these mutations can be purified from the residual parental monoclonal antibodies in one step using protein A affinity chromatography. The structural basis for the effects of these mutations was analyzed by X-ray crystallography. While the mutation that disrupted protein A binding also inhibited FcRn interaction, a bispecific mutant in which one subunit retained the ability to bind protein A could still interact with FcRn. Pharmacokinetic analysis of the serum half-lives of the mutants showed that the mutant BsAb had a serum half-life comparable to a wild-type Ab. The results describe a rapid method for generating panels of mouse BsAbs that could be used in mouse studies.

Properties of mouse and human IgG receptors and their contribution to disease models.

Pierre Bruhns (2012)
Impressive advances in defining the properties of receptors for the Fc portion of immunoglobulins (FcR) have been made over the past several years. Ligand specificities were systematically analyzed for both human and mouse FcRs that revealed novel receptors for specific IgG subclasses. Expression patterns were redefined using novel specific anti-FcR mAbs that revealed major differences between human and mouse systems. The in vivo roles of IgG receptors have been addressed using specific FcR knockout mice or in mice expressing a single FcR, and have demonstrated a predominant contribution of mouse activating IgG receptors FcγRIII and FcγRIV to models of autoimmunity (eg, arthritis) and allergy (eg, anaphylaxis). Novel blocking mAbs specific for these activating IgG receptors have enabled, for the first time, the investigation of their roles in vivo in wild-type mice. In parallel, the in vivo properties of human FcRs have been reported using transgenic mice and models of inflammatory and allergic reactions, in particular those of human activating IgG receptor FcγRIIA (CD32A). Importantly, these studies led to the identification of specific cell populations responsible for the induction of various inflammatory diseases and have revealed, in particular, the unexpected contribution of neutrophils and monocytes to the induction of anaphylactic shock.

Convergent solutions to binding at a protein-protein interface.

Rob A I de Vos,  Adam Wells,  W DeLano … (2000)
The hinge region on the Fc fragment of human immunoglobulin G interacts with at least four different natural protein scaffolds that bind at a common site between the C(H2) and C(H3) domains. This "consensus" site was also dominant for binding of random peptides selected in vitro for high affinity (dissociation constant, about 25 nanomolar) by bacteriophage display. Thus, this site appears to be preferred owing to its intrinsic physiochemical properties, and not for biological function alone. A 2.7 angstrom crystal structure of a selected 13-amino acid peptide in complex with Fc demonstrated that the peptide adopts a compact structure radically different from that of the other Fc binding proteins. Nevertheless, the specific Fc binding interactions of the peptide strongly mimic those of the other proteins. Juxtaposition of the available Fc-complex crystal structures showed that the convergent binding surface is highly accessible, adaptive, and hydrophobic and contains relatively few sites for polar interactions. These are all properties that may promote cross-reactive binding, which is common to protein-protein interactions and especially hormone-receptor complexes.

Supplemental data for this article can be accessed on the publisher's website.