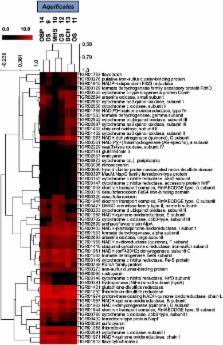 The Aquificales are thermophilic microorganisms that inhabit hydrothermal systems worldwide and are considered one of the earliest lineages of the domain Bacteria. We analyzed metagenome sequence obtained from six thermal “filamentous streamer” communities (∼40 Mbp per site), which targeted three different groups of Aquificales found in Yellowstone National Park (YNP). Unassembled metagenome sequence and PCR-amplified 16S rRNA gene libraries revealed that acidic, sulfidic sites were dominated by Hydrogenobaculum (Aquificaceae) populations, whereas the circum-neutral pH (6.5–7.8) sites containing dissolved sulfide were dominated by Sulfurihydrogenibium spp. (Hydrogenothermaceae). Thermocrinis (Aquificaceae) populations were found primarily in the circum-neutral sites with undetectable sulfide, and to a lesser extent in one sulfidic system at pH 8. Phylogenetic analysis of assembled sequence containing 16S rRNA genes as well as conserved protein-encoding genes revealed that the composition and function of these communities varied across geochemical conditions. Each Aquificales lineage contained genes for CO 2 fixation by the reverse-TCA cycle, but only the Sulfurihydrogenibium populations perform citrate cleavage using ATP citrate lyase (Acl). The Aquificaceae populations use an alternative pathway catalyzed by two separate enzymes, citryl-CoA synthetase (Ccs), and citryl-CoA lyase (Ccl). All three Aquificales lineages contained evidence of aerobic respiration, albeit due to completely different types of heme Cu oxidases (subunit I) involved in oxygen reduction. The distribution of Aquificales populations and differences among functional genes involved in energy generation and electron transport is consistent with the hypothesis that geochemical parameters (e.g., pH, sulfide, H 2, O 2) have resulted in niche specialization among members of the Aquificales.

Duccio Medini,  Claudio Donati,  Hervé Tettelin … (2005)
A decade after the beginning of the genomic era, the question of how genomics can describe a bacterial species has not been fully addressed. Experimental data have shown that in some species new genes are discovered even after sequencing the genomes of several strains. Mathematical modeling predicts that new genes will be discovered even after sequencing hundreds of genomes per species. Therefore, a bacterial species can be described by its pan-genome, which is composed of a "core genome" containing genes present in all strains, and a "dispensable genome" containing genes present in two or more strains and genes unique to single strains. Given that the number of unique genes is vast, the pan-genome of a bacterial species might be orders of magnitude larger than any single genome.

Thomas Huber,  Geoffrey Faulkner,  Philip Hugenholtz (2004)
Bellerophon is a program for detecting chimeric sequences in multiple sequence datasets by an adaption of partial treeing analysis. Bellerophon was specifically developed to detect 16S rRNA gene chimeras in PCR-clone libraries of environmental samples but can be applied to other nucleotide sequence alignments. Bellerophon is available as an interactive web server at http://foo.maths.uq.edu.au/~huber/bellerophon.pl