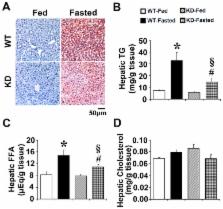 The purpose of this study was to determine whether Nrf2 activation, via Keap1-knockdown (Keap1-KD), regulates lipid metabolism and mobilization induced by food deprivation (e.g. fasting).

Enhanced Nrf2 activity via Keap1-KD decreased fasting-induced steatosis, pointing to an important function of Nrf2 on lipid metabolism under the condition of nutrient deprivation.

Federico Díaz-González,  J. Seydoux,  B. Desvergne … (1999)
Prolonged deprivation of food induces dramatic changes in mammalian metabolism, including the release of large amounts of fatty acids from the adipose tissue, followed by their oxidation in the liver. The nuclear receptor known as peroxisome proliferator-activated receptor alpha (PPARalpha) was found to play a role in regulating mitochondrial and peroxisomal fatty acid oxidation, suggesting that PPARalpha may be involved in the transcriptional response to fasting. To investigate this possibility, PPARalpha-null mice were subjected to a high fat diet or to fasting, and their responses were compared with those of wild-type mice. PPARalpha-null mice chronically fed a high fat diet showed a massive accumulation of lipid in their livers. A similar phenotype was noted in PPARalpha-null mice fasted for 24 hours, who also displayed severe hypoglycemia, hypoketonemia, hypothermia, and elevated plasma free fatty acid levels, indicating a dramatic inhibition of fatty acid uptake and oxidation. It is shown that to accommodate the increased requirement for hepatic fatty acid oxidation, PPARalpha mRNA is induced during fasting in wild-type mice. The data indicate that PPARalpha plays a pivotal role in the management of energy stores during fasting. By modulating gene expression, PPARalpha stimulates hepatic fatty acid oxidation to supply substrates that can be metabolized by other tissues.

Aparna Purushotham,  Thaddeus Schug,  Qing Fang Xu … (2009)
Hepatic metabolic derangements are key components in the development of fatty liver, insulin resistance, and atherosclerosis. SIRT1, a NAD+-dependent protein deacetylase, is an important regulator of energy homeostasis in response to nutrient availability. Here we demonstrate that hepatic SIRT1 regulates lipid homeostasis by positively regulating peroxisome proliferators-activated receptor alpha (PPARalpha), a nuclear receptor that mediates the adaptive response to fasting and starvation. Hepatocyte-specific deletion of SIRT1 impairs PPARalpha signaling and decreases fatty acid beta-oxidation, whereas overexpression of SIRT1 induces the expression of PPARalpha targets. SIRT1 interacts with PPARalpha and is required to activate PPARalpha coactivator PGC-1alpha. When challenged with a high-fat diet, liver-specific SIRT1 knockout mice develop hepatic steatosis, hepatic inflammation, and endoplasmic reticulum stress. Taken together, our data indicate that SIRT1 plays a vital role in the regulation of hepatic lipid homeostasis and that pharmacological activation of SIRT1 may be important for the prevention of obesity-associated metabolic diseases.

H-p Liang,  Keith W. Ward (2006)
Peroxisome proliferator-activated receptor-gamma coactivator (PGC)-1alpha is a member of a family of transcription coactivators that plays a central role in the regulation of cellular energy metabolism. It is strongly induced by cold exposure, linking this environmental stimulus to adaptive thermogenesis. PGC-1alpha stimulates mitochondrial biogenesis and promotes the remodeling of muscle tissue to a fiber-type composition that is metabolically more oxidative and less glycolytic in nature, and it participates in the regulation of both carbohydrate and lipid metabolism. It is highly likely that PGC-1alpha is intimately involved in disorders such as obesity, diabetes, and cardiomyopathy. In particular, its regulatory function in lipid metabolism makes it an inviting target for pharmacological intervention in the treatment of obesity and Type 2 diabetes.