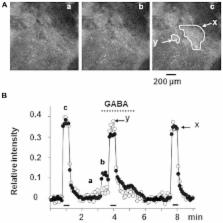 Gamma-aminobutyric acid (GABA) is produced not only in the brain, but also in endocrine cells by the two isoforms of glutamic acid decarboxylase (GAD), GAD65 and GAD67. In rat adrenal medullary chromaffin cells only GAD67 is expressed, and GABA is stored in large dense core vesicles (LDCVs), but not synaptic-like microvesicles (SLMVs). The α3β2/3γ2 complex represents the majority of GABA A receptors expressed in rat and guinea pig chromaffin cells, whereas PC12 cells, an immortalized rat chromaffin cell line, express the α1 subunit as well as the α3. The expression of α3, but not α1, in PC12 cells is enhanced by glucocorticoid activity, which may be mediated by both the mineralocorticoid receptor (MR) and the glucocorticoid receptor (GR). GABA has two actions mediated by GABA A receptors in chromaffin cells: it induces catecholamine secretion by itself and produces an inhibition of synaptically evoked secretion by a shunt effect. Allopregnanolone, a neuroactive steroid which is secreted from the adrenal cortex, produces a marked facilitation of GABA A receptor channel activity. Since there are no GABAergic nerve fibers in the adrenal medulla, GABA may function as a para/autocrine factor in the chromaffin cells. This function of GABA may be facilitated by expression of the immature isoforms of GAD and GABA A receptors and the lack of expression of plasma membrane GABA transporters (GATs). In this review, we will consider how the para/autocrine function of GABA is achieved, focusing on the structural and molecular mechanisms for GABA signaling.

Stress and the brain: from adaptation to disease.

Florian Holsboer,  David E A Kloet,  Marian Joels … (2005)
In response to stress, the brain activates several neuropeptide-secreting systems. This eventually leads to the release of adrenal corticosteroid hormones, which subsequently feed back on the brain and bind to two types of nuclear receptor that act as transcriptional regulators. By targeting many genes, corticosteroids function in a binary fashion, and serve as a master switch in the control of neuronal and network responses that underlie behavioural adaptation. In genetically predisposed individuals, an imbalance in this binary control mechanism can introduce a bias towards stress-related brain disease after adverse experiences. New candidate susceptibility genes that serve as markers for the prediction of vulnerable phenotypes are now being identified.

Jean-Luc Gaiarsa,  Yehezkel Ben-Ari,  Roman Tyzio … (2007)
Developing networks follow common rules to shift from silent cells to coactive networks that operate via thousands of synapses. This review deals with some of these rules and in particular those concerning the crucial role of the neurotransmitter gamma-aminobuytric acid (GABA), which operates primarily via chloride-permeable GABA(A) receptor channels. In all developing animal species and brain structures investigated, neurons have a higher intracellular chloride concentration at an early stage leading to an efflux of chloride and excitatory actions of GABA in immature neurons. This triggers sodium spikes, activates voltage-gated calcium channels, and acts in synergy with NMDA channels by removing the voltage-dependent magnesium block. GABA signaling is also established before glutamatergic transmission, suggesting that GABA is the principal excitatory transmitter during early development. In fact, even before synapse formation, GABA signaling can modulate the cell cycle and migration. The consequence of these rules is that developing networks generate primitive patterns of network activity, notably the giant depolarizing potentials (GDPs), largely through the excitatory actions of GABA and its synergistic interactions with glutamate signaling. These early types of network activity are likely required for neurons to fire together and thus to "wire together" so that functional units within cortical networks are formed. In addition, depolarizing GABA has a strong impact on synaptic plasticity and pathological insults, notably seizures of the immature brain. In conclusion, it is suggested that an evolutionary preserved role for excitatory GABA in immature cells provides an important mechanism in the formation of synapses and activity in neuronal networks.

Maternal care during infancy regulates the development of neural systems mediating the expression of fearfulness in the rat.

B Tannenbaum,  S. Sharma,  D. Francis … (1998)
The mothers of infant rats show individual differences in the frequency of licking/grooming and arched-back nursing (LG-ABN) of pups that contribute to the development of individual differences in behavioral responses to stress. As adults, the offspring of mothers that exhibited high levels of LG-ABN showed substantially reduced behavioral fearfulness in response to novelty compared with the offspring of low LG-ABN mothers. In addition, the adult offspring of the high LG-ABN mothers showed significantly (i) increased central benzodiazepine receptor density in the central, lateral, and basolateral nuclei of the amygdala as well as in the locus ceruleus, (ii) increased alpha2 adrenoreceptor density in the locus ceruleus, and (iii) decreased corticotropin-releasing hormone (CRH) receptor density in the locus ceruleus. The expression of fear and anxiety is regulated by a neural circuitry that includes the activation of ascending noradrenergic projections from the locus ceruleus to the forebrain structures. Considering the importance of the amygdala, notably the anxiogenic influence of CRH projections from the amygdala to the locus ceruleus, as well as the anxiolytic actions of benzodiazepines, for the expression of behavioral responses to stress, these findings suggest that maternal care during infancy serves to "program" behavioral responses to stress in the offspring by altering the development of the neural systems that mediate fearfulness.